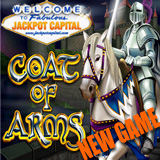 11 April 2011 (Nicosia, Cyprus) – Coats of arms are popular slot machine symbols and for fans of knights and castles, swords and chalices, JackpotCapital.com has just launched an entire game featuring mythical Medieval symbols. To celebrate the launch of the new game they’re giving players free bonus money to try it. To help ease the pain of taxes, there’s also a special mid-month Tax Day Bonus as well.

Coat of Arms is a 5 reel 25 pay line slot machine from RTG. It’s a medieval-themed slots game where the Black Knight is Wild and doubles the prize when he appears in a winning combination. The White Knight is the Scatter symbol – two or more triggers a re-spin feature with the remaining reels spinning up to 10 times.

“Bonus games give players lots of extra playing time for their money,” said Jackpot Capital manager Oliver Smith. “In this new game, you can win up to fifteen free games when a bonus Golden Shield appears on certain reels.”

There are two ways to get extra playing time in this game. There’s a Bonus Crown substitute symbol on reel 3 and accumulating 5 or more throughout the feature awards extra games.

There are two progressive jackpots in this game – a minor and a major– that can be triggered at random at the end of any game.

To claim their Coat of Arms Deposit Bonus – 100% up to $100 – players should enter this coupon code at the casino cashier: COATOFARMS.

April 15th is the deadline for filing income tax in the United States and to help overcome the blues that that can bring Jackpot Capital has some additional free bonus money. On Tax Day players can enter the coupon code TAXBLUES when they deposit and get an extra 100% up to $150.

These special bonuses are in addition to the Monday Mystery Bonus (for players that deposit and play over the weekend) and Hump Wednesday Bonus (free money on Wednesday for players that play Monday and Tuesday) that are available this month as usual.

JackpotCapital.com is home to the biggest progressive jackpots available online to US players. At over $1.6 million, the Jackpot Pinatas jackpot is the largest jackpot available, but two other jackpots have also reached seven-figures. The Aztec’s Millions jackpot and the jackpot tied to both the Mid-Life Crisis and Shopping Spree slots are both well over $1 million.