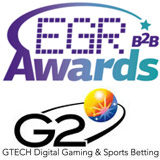 13 April 2011 (London, UK) – GTECH G2 is nominated for eight eGaming Review (EGR) B2B Awards, the highest number of nominations at the event, confirming its position as the premier digital gaming and sports betting supplier to both the commercial and world lottery markets. The diversity of the award categories reflects the fact that GTECH G2 is a supplier that can truly offer complete end-to-end solutions for poker, sports betting, bingo, casino, lottery, skill games, instant games and back office systems for commercial and state-run operators.

The EGR B2B Awards are the industry’s premier awards ceremony. The very best service providers and B2B operators in the online gaming industry are recognised with the awards covering all major supplier disciplines.

GTECH G2 has been shortlisted in the following eight categories:

Innovative new features on the company’s International Bingo Network, like live presenters and managed chat facilities, earned three nominations for Bingo achievements: Bingo Network of the Year, Bingo Supplier of the Year and Innovation in Bingo of the Year.

“We are particularly proud that our bingo software and network is being recognized,” said Dominic Mansour, Vice President, Gaming Products. “Our designers and developers have really focused on giving bingo buffs more fun as they socialize with other players. New features like live presenters and colourful side games with themes from licensed brands, like Chippendales, are engaging players longer and building player liquidity.”

As part of the Lottomatica Group, GTECH G2 fully understands the complexities of working within regulated markets. The nomination for Lottery Software Supplier of the Year recognises the company’s long and established pedigree within the lottery industry.

“The Canadian Poker Network is collaboration between two respected WLA lotteries that we’re very proud to be associated with,” said Paolo Personeni, GTECH G2 CEO. “We’re here to help lottery organizations as they make the intimidating yet necessary move to expand through reliable online games, so we’re grateful to the judge’s for this recognition.”

The nomination for Poker Network of the Year and Poker Software of the Year further highlights GTECH G2’s expertise in poker and demonstrates the continued success of the International Poker Network (IPN). The IPN is the most popular network in Europe for cash players and one of the largest networks in the world in terms of size. GTECH G2 in 2011 has continued to develop the IPN with a significant investment in the network.

The nomination for Sport Betting Supplier of the Year celebrates the fact that GTECH G2 continues to go from strength to strength as a leading sports betting supplier to both commercial bookmaker and government regulated markets. GTECH G2 can now boast nearly 8000 Margin Maker tills worldwide and in 2010 completed the successful launch of BetCafe Arena in Romania, successfully launching 150 new terminals in twelve months and increasing to 400 retailers over the course of 2011/12.

GTECH G2 prides itself on security and offering its client’s peace of mind in the protection against fraud and is proud that BScreened, its fraud detection system, has been nominated in the Fraud & Compliance Solution of the Year category.

GTECH G2 is proud to offer clients a full service solution and is delighted that the range of nominations reflects its expertise and broad spectrum of products.

The EGR Awards will be presented at a black tie gala Tuesday 3 May 2011 at Chelsea Football Club in London.

GTECH G2 (www.gtechg2.com)
GTECH G2 is the interactive division of leading lottery services provider GTECH and brings together the lottery expertise of GTECH with Boss Media, a leading innovator in software and systems for poker, casino and bingo entertainment; Finsoft , a leading provider of enterprise-wide real time trading solutions for the commercial sports betting industry – both interactive and retail; St Minver, a fully managed service provider of Internet games to media, lifestyle, and other brands; and Dynamite Idea, a developer of unique, innovative digital instant and side games.

EGR Award Nominations
Providing a broader spectrum of products than any of its competitors, GTECH G2 received more nominations than any other supplier:

International Bingo Network (IBN)
Last year, GTECH migrated nearly a hundred European bingo sites to a new, improved network. The IBN is the strongest Pan-European online bingo network and home to major partners such as Castle Bingo, ChitChat Bingo, Littlewoods and Butlins. The IBN pools players from major European markets including the UK, Spain, the Netherlands, Sweden, Denmark and Norway. Due to its size and popularity, licensees can offer huge attractive game pots and progressive jackpots, rewarding players with millions in prizes each month.

In 2010, the IBN launched another new bingo variation, 80-ball speed ball, and games became hosted by live presenters to heighten enjoyment and participation. Side and mini games, including several with themes from popular licensed brands such as Chippendales, increase profits and maintain player liquidity.

Canadian Poker Network (CPN)
In 2010, the first regulated poker site in North America was launched and the Canadian Poker Network was born. GTECH G2 became the first e-gaming software and services provider to successfully address the unique concerns of members of the World Lottery Association by building and an online poker network for cooperating Canadian provinces. The Canadian Poker Network is operated from Moncton, New Brunswick and is powered by GTECH G2’s state-of-the-art poker software with system approval by the Gaming Policy and Enforcement Branch of British Columbia. The poker client incorporates responsible gaming tools.

Work to help Canada’s provincial lottery organizations build a well-structured online poker network began last March. Only months later, on December 1, 2010, the CPN went live right on schedule. The network has since been in operation without incident, serving as a meeting place for more than 12 million residents of Quebec and British Columbia. Poker enthusiasts in Quebec can access the network through Loto-Québec’s site, Espacejeux.com, while those in British Columbia can turn to Playnow.com, operated by British Columbia Lottery Corporation (BCLC).