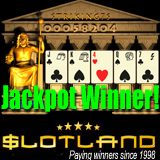 “Of course the jackpot can be won anytime but we usually go six to eight weeks between wins,” said Slotland Manager Michael Hilary. “It didn’t have time to get up to $100K or $150K this time, like it usually does, but I’m sure the winner is happy just the same!”

Marianne M. has been playing at Slotland since March 2009. She said she keeps coming back to Slotland because she enjoys its one-of-a-kind games and finds that the wagering requirements on promotional bonuses are fair.

“That night, I actually logged on to Slotland to try the new game, Jewels of the Ancients. I’d just read in my Slotland newsletter that there was a promotion running with free bonus money available. I do like the new game, but after awhile I felt like playing cards instead of slots so I switched to my favourite video poker game, Striking 7s. I like its Double feature where I can take a chance at multiplying my win.”

She said she plans to save most of her win. She’ll invest part of it but also plans to take her boyfriend on a vacation to South America.

This is Slotland’s third big jackpot winner this year. In January a new player won $104K playing the Booster slot machine followed by the $145K win on Lucky Ducts at the end of February. Last year there were six major jackpot wins ranging from $78K to $165K.

Striking 7s is a video poker game where 7s are Wild and a special bonus round can multiply winnings. Players receive five cards and can hold all five or receive up to five new cards to create the best poker hand possible. After every winning hand, players can take their winnings or take a chance at doubling them by drawing a card of higher value than the first card drawn. All slots games at Slotland.com are tied to one big progressive jackpot. In Striking 7s, it takes a Natural Royal Flush with a $10 bet to win the jackpot.

Launched just last month, the new Jewels of the Ancients slot machine is the twentieth unique game at Slotland which has been offering one-of-a-kind slot machines and video poker games for more than twelve years.

The progressive jackpot at Slotland was reset to $50,000 after this win. Meanwhile at Slotland’s sister casino, WinADayCasino.com, the jackpot was also won just recently and but is back up to over $75,000.

About Slotland.com
Established in 1998, Slotland.com is renowned for its fairness, security and sincerity. Slotland.com’s progressive jackpot is won on average every six weeks and usually stands at over $100,000, making it one of the most frequently won jackpots on the Internet. In 2005, the pioneering entertainment company introduced its first slot machine for the mobile phone/PDA platform. Slotland.com has been voted “Most Unique Slot Site” and “Best Progressive Jackpot Site” by Strictly Slots Magazine readers, named “Best Web TV” in a Gambling Online Magazine poll, and selected as a finalist in the ME Awards “Best Mobile Gambling Company” category. In 2008, Slotland.com launched WinADayCasino.com, a whole new kind of online casino experience with beautifully illustrated whimsical, one-of-a-kind instant-play Flash games.