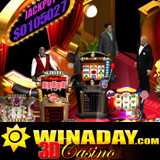 8 October 2009 (London, UK) – The progressive jackpot at 3D casino WinADay.com has just gone over $100,000 and players at the unique slots and video poker site are getting the feeling that the next big jackpot win could happen any day.

There aren’t a lot of statistics to base that feeling on. Although it’s operated by one of the oldest online slots sites (Slotland.com) WinADay.com just celebrated its first birthday this summer and has only had four major jackpot winners to date.

So far, the jackpot at WinADay.com has been rising to about $150,000 before someone gets lucky and wins it. There’s also usually been about three months between wins, too, and it’s only been a month and a half since the last one. So it may be a bit premature to expect the next win to be imminent.

“Gamblers often go a lot by hunches,” said Ondrej Tuma of WinADay.com. “Of course we have no idea when the jackpot will be won but in the past when a jackpot gets to six figures that’s when we really start to see a lot of players betting max and going for it. Of course, that makes the jackpot grow even faster!”

A video preview of WinADay.com’s newest game, the colourful Bonus Poker video poker, is on YouTube at: http://www.youtube.com/watch?v=huAHN1g9e4M

There’s nothing to download or install at WinADay.com. It’s an instant-play casino so players can go straight to the three-dimensional games lobby where animated casino staff will help them decide which of the eight one-of-a-kind games to try first and be playing in minutes.

The progressive jackpot at WinADay’s parent site, Slotland.com, has risen to over $160,000 and is also teasing players with the prospect of a very big win on the very next spin.

Prev: OFC Winner to Play Ilari “Ziigmund” Sahamies in Heads Up Match Next: Slotland Jackpot Tempts Fate as it Soars Over $160,000