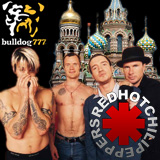 5 July 2012 (London, UK) – Two players at Bulldog777.com Casino and Poker got calls the other day saying they’d won a free trip to a Red Hot Chili Peppers concert in Russia. One of them didn’t even realize she’d been automatically entered in the free contest just by playing her favourite online slots game. Nevertheless, each of the randomly drawn winners won a $10,000 prize package to attend the July 20th concert at Petrovsky Stadium in St Petersburg.

“Honestly, I just like the slots they have, like Major Millions,” said Gizelle, 39, a restaurant manager in Prague, Czech Republic. “I had no idea I was entered in a free contest – what a bonus!”

The other luxury travel prize winner knew all about the contest and was hoping to see his favourite band in his favourite city. “I can’t believe it!” said Maksim, an accountant and Texas Hold’em player in Moscow. “My wife and I have been Chili Peppers fans since the Blood Sugar Sex Magik album. This is a dream come true!”

Maksim’s wife will join him in St Petersburg. Gizelle said she’ll take her son to the concert. The prize includes prime concert tickets, five-star accommodations and business class airfare to St Petersburg. The winners and their guests will stay at The Grand Hotel, the most luxurious five-star hotel in Russia, and will dine at the renowned Flying Dutchman restaurant.

“We have lots of Russian casino players because our website is available in Russian, and we offer full customer service in Russian,” said Bulldog777.com’s casino manager. “So I’m not surprised that one of the winners is Russian. Also cool one prize went to a casino player and the other to a poker player. Congrats to both Maksim and Gizelle!”

The Red Hot Chili Peppers are an American rock band formed in 1983. In 1990, the group recorded Blood Sugar Sex Magik , their first commercial success thanks to hits like Give It Away, Suck My Kiss, Under the Bridges and If You Have to Ask. Californication later sold fifteen million copies worldwide and became the band’s biggest commercial success. The Red Hot Chili Peppers were inducted into the Rock and Roll Hall of Fame in earlier this year.

Bulldog777.com has dozens of games in its online casino but the new The Dark Knight Online Slot from Microgaming is by far the most popular this summer. The Dark Knight video slot has the same action packed visual experience as the legendary motion picture from Warner Bros. Pictures, and features video clips, bonus games and a four-tier progressive jackpot.

A video version of this story is on YouTube: http://youtu.be/93Egb7si4TQ