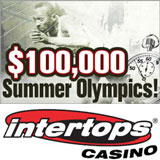 July 5, 2012 (St. Johns, Antigua) – This month Intertops Casino salutes Olympic champions with a $100,000 casino bonus giveaway, including cash prizes. The new MultiPlayer French Roulette game launching during the festivities makes online casino games more like “being there” than ever.

The summer bonus program is one of Intertops’ biggest ever and, as usual, they’ve organized it so everyone has a chance to win.

The casino bonus categories this month pay tribute to thrills like Jess Owens’ 4 Gold medals in 1936, Nadia Comaneci’s perfect 10 in 1976, the US soccer Gold in 1996 and Michael Phelps’ 8 Gold medals in 2008. Prize winners will be drawn in each category on Monday July 30th. Three players that reach the top level will win $1000 cash each; three players at each other level will also win prizes. The promotion continues in August and a final draw will be held September 3rd when another three players on each level will win more prizes. Players can check their current points and ranking any time on the scoreboard (http://casinopromotions.intertops.eu/july2012).

Twice a week throughout the summer, hundreds more players will get emails letting them know they’ve been given a free bonus up to $250. (Players must have played and deposited in the previous days to qualify.) Between now and September 3rd Intertops Casino will give away a total of $100,000 in casino bonuses and cash prizes.

New MultiPlayer French Roulette
This month Intertops takes online casino games to a whole new level with the launch of its new feature-rich MultiPlayer French Roulette from Realtime Gaming (RTG). “MultiPlayer” means punters can play at the same table and watch others place their bets. They can learn from lucky players, challenge the biggest winners, or just chat and enjoy the game with fellow players – just like in a Las Vegas casino.

MultiPlayer French Roulette is a deluxe, full-featured game with La Partage rule. There are Open, Reserved and Private tables. Favorite bets can be saved and Voisins, Orphelins, Tiers, Red and Black Splits are available. The new game “Roulette MultiPlayer” can be found in the Specialty Games tab at Intertops Casino.