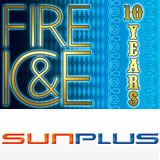 5 January 2011 (London, UK) – Lyceum Media, organizers of the biggest iGaming party of the year, are happy to announce that one of the world’s largest sportsbook providers, Sunplus, will be one of the main sponsors of the 10th Annual Fire & ICE party held on 26 January 2011 at Gilgamesh.

With 10 years of experience in sportsbetting and the market leader in Asia, Sunplus is launching their turnkey sportsbetting solution and ONEbook platform to the European market at ICE Stand 6250 with a special VIP launch party in the Gilgamesh State Room for their invited guests.

“These are exciting times for sportsbetting technology as we launch into the European market,” said Tom Hall, Business Development Director, Sunplus. “We’re looking to make an impression at ICE and create a memorable launch event at the industry’s most popular party of the year.”

Fire & ICE will unmask partiers’ imaginations throughout the night and showcase a fantasy like cirque event. Without revealing too many details, they will encourage guests to be armed with exotic masks.

“We’re planning an extra special event as it’s our tenth anniversary and it’s amazing that we’ve got two leading corporations supporting it,” said Jodie Thind. “I’m thrilled that Sunplus’ launch party is associated with Fire & ICE and as they are hosting it with the assistance of model agencies PMGirls from the US and UK’s MaxxiMage, so we are sure that the entertainment will be something special!”

Guest registration is not yet open for Fire & ICE but sponsorship opportunities and VIP tables are still available.

Photos and video clips from past events are available at http://www.fireandiceparty.com

About Fire & Ice http://www.fireandiceparty.com
Held each year between ICE and the London Affiliate Conference (LAC), Fire & Ice is produced by iGaming PR and events specialists Lyceum Media. It began in 2002 when partners Jodie Thind and Michael Caselli decided that they wanted a social event to rival those held by the terrestrial-gaming industry. Now in its tenth decadent year, Fire & Ice is the most anticipated event in the iGaming social calendar and the largest social iGaming networking event. Fire & Ice is for the industry and completely supported by the industry.

About Sunplus http://www.sunpluscorp.com
Sunplus Technologies are a global technology company specializing in software for the gaming industry. With a strong history in Asia (10 years experience), Sunplus are bringing their platform, ONEbook, to market in Europe. In January, Sunplus will have a presence at the ICE Stand 6250.