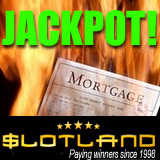 10 January 2011 (London, UK) – The new year is off to a great start for one lucky slots player at Slotland.com. Known as TWOTONEJOAN on the much-loved slots and video poker site, the novice player won $104,514 playing the Booster slot machine last week.

“I still feel like such a newbie at this,” said the winner. “I can’t believe I actually won so much! Slotland was one of the first casinos I tried and I just liked it from the start. Their games are way different than what you see at other places. Before I got so lucky on Booster I would have said that Treasure Box or maybe Reel Riot was my favorite but now I’m definitely a Booster fan!”

The lucky jackpot winner said she’d put most of her winnings toward her mortgage – after a little shopping spree for some new outfits! She said she also planned to set some of her windfall aside to keep playing slots with.

Slotland’s jackpot is won, on average, every six weeks or so, usually for $100,000 to $150,000. However, although it’s been paying out every day for many years, Booster hasn’t had a major progressive jackpot winner for quite some time. At over $168K that one was one of the biggest of the year though.

The Booster slot game is a three-wheel, single pay line online slot machine. Its BOOST symbol is wild. Whenever it appears players can either keep their current bet or “boost” it up to10x.

“Although many players like to play multi-pay line slot machines, like our new Lucky Ducts where you can bet on up to 19 pay lines per spin, lots of people like simpler single pay line games like Booster,” said Michael Hilary of Slotland.com. “Another thing players really like about Booster is that no bet is ever totally lost!”

Every bet that doesn’t win is added to the special fund and can be cashed anytime for 10% of its value – or in a special all or nothing win/lose spin, players can recover all their losing bets.

There were lots of major jackpot wins at Slotland in 2010. The first was a player who’d had many smaller wins, but never a massive jackpot like the $134,385 he won in February playing the Genie-themed Magic. Then in May the biggest jackpot of the year — $163,476 – was won on the Golden 8. SOUTHBELLE won almost $150K on Lucky Stars in August and a Canadian won $107,064 on Wild Heart shortly after. A budget-conscious grandmother won almost $80K playing Jacks or Better video poker slot in November.

A popular online casino for more than twelve years, Slotland.com now has 19 one-of-a-kind slot machines and video poker games. A new game, vampire-themed Jewels of the Ancients, will be launched next month. Many of the instant-play games have recently been upgraded with enhanced graphics and sound effects. Six of the most popular games are also available on mobile phones and PDAs.

The jackpot at Slotland was reset to $50,000 after this win and is already over $60,000. Meanwhile at Slotland’s sister casino, WinADayCasino.com, the jackpot is over $160,000 and many players feel it is overdue for a hit.

Affiliate inquiries: Justin@slotlandaffiliates.com
Slotland Affiliate Managers will be at the London Affiliate Conference later this month
to talk to affiliates about their Gross and Net Revenue Share options.

About Slotland.com
Established in 1998, Slotland.com is renowned for its fairness, security and sincerity. Slotland.com’s progressive jackpot is won on average every six weeks and usually stands at over $100,000, making it one of the most frequently won jackpots on the Internet. In 2005, the pioneering entertainment company introduced its first slot machine for the mobile phone/PDA platform. Slotland.com has been voted “Most Unique Slot Site” and “Best Progressive Jackpot Site” by Strictly Slots Magazine readers, named “Best Web TV” in a Gambling Online Magazine poll, and selected as a finalist in the ME Awards “Best Mobile Gambling Company” category. Last year, Slotland.com launched, WinADayCasino.com, a whole new kind of online casino experience with beautifully illustrated whimsical, one-of-a-kind instant-play Flash games.