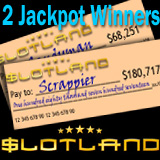 “On average, we’ve always gone six to eight weeks between big jackpot winners,” said Slotland manager Michael Hilary. “None of us, least of all the winner, thought there’d be another jackpot win already!”

First Alice M, known as SCRAPPIER at Slotland, won the progressive jackpot at $180,717. It was re-set to $50,000 and just a couple of weeks later, Alberto S. aka SANDYMAN hit it again winning $68,251. Alice had been playing the traditional fruitie, Fruitmania. Alberto won his jackpot playing one of Slotland’s very first games, Spacejack.

Alice has been a regular player at Slotland, one of the most popular no download slots and video poker sites in the world, since 2009.

“I can’t believe it happened to me!” Alice told a Slotland customer service representative. “My hubby is between jobs right now so this win couldn’t have come at a better time!”

“SpaceJack isn’t even my favorite game. My favourites are the new ones like Tikal Treasure. “But I like going back to games I haven’t played for a long time. There’s quite a few to choose from now. You never know when you will get lucky but I think Spacejack will now always be my lucky slot!”

Alberto said he’s looking forward to paying off some debt and to taking his family on a small trip.

Slotland has been entertaining slots and video poker players around the world for more than thirteen years. It has 24 unique instant-play slots online that aren’t available at any other online casino. Six, however, are also available as mobile slots. Most slots games are tied to one progressive jackpot which was reset to $50,000 after Alberto’s win.

The video version of this story is also available on YouTube.