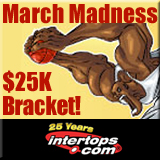 March 14, 2011 (St. Johns, Antigua) – The time for speculation is over at last. The American college basketball bracket has been set and Intertops Sportsbook is running several free contests to add to the excitement of March Madness. The popular US-friendly online sportsbook will award $25,000 in its annual College Hoops March Madness Bracket contest and is giving away more cash and prizes in other free contests this month.

“Correctly predicting the outcome of 63 games is hard, there’s no doubt about that,” said a spokesperson from Intertops Sportsbook, the world’s very first and still most popular online sportsbook. “We can’t make it easy – but we can make it free! And even if no one predicts every game correctly, we’ll still pay out the prize money.”

Basketball fans have until Thursday to make their selections and enter the free contest. If no player manages to select a “perfect bracket”, the prize money will be divided equally amongst the 25 players with the most correct picks.

Until Friday, Intertops’ March Madness Deposit Bonus will add 20% (up to $100) to all deposits.

And that’s not all: Intertops customers wagering at least $500 on the games of the March Madness tournament are automatically entered in a random draw for a $5000 cash prize — with no rollover requirements. Also, every dollar wagered on March Madness games at Intertops is one entry in a free draw for a 2012 Final Four Weekend prize package.

Intertops, which recently celebrated the fifteenth anniversary of the day it took the very first online sports bet, welcomes players from around the world and offers more wagers on more American major league sports than any other online sportsbook. It is known for quick, hassle-free deposits and withdrawals and excellence in customer service.