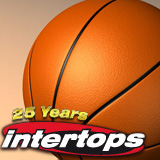 March 11, 2011 (St. Johns, Antigua) – Spring has sprung and with it comes the annual March Madness of American college basketball. To add to the excitement of the NCAA basketball tournament on this month, Intertops Sportsbook is giving away free money and a basketball fan’s dream trip.

Available until March 18th, the 20% March Madness Bonus gives players up to $100 for free. Players wagering on March Madness college basketball games this month are also automatically entered in draws for $5000 cash and a trip to next year’s Final Four weekend.

“This is an exciting time of year – 68 teams all coming down to the Final Four and then one champion in just a few weeks,” said an Intertops spokesperson. “At this point, it’s anybody’s game. The Pittsburgh Panthers have an explosive offense and are serious contenders for the championship. But the Ohio State Buckeyes are first in the Big-Ten and sitting pretty. On the other hand, Duke has experience on its side and could make a run at repeating last year’s championship success!”

Every dollar bet on March Madness games at Intertops is one entry in a free draw for a 2012 Final Four Weekend prize package.

Everyone wagering at least $500 on the games of the March Madness tournament is automatically entered in a random draw for a $5000 cash prize — with no rollover requirements.

Intertops is the world’s first online sportsbook. Players from around the world have trusted Intertops with their bets on sports — especially American major league sports — since 1996. The popular online sportsbook is known for quick, hassle-free deposits and withdrawals and excellence in customer service.