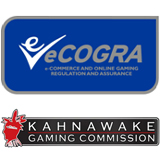 London 25 January 2010 – In a drive to help its licensees meet high international standards of fairness, player protection, operational conduct and responsible gambling, the Kahnawake Gaming Commission (“KGC”) today launched a new compliance program that will involve the third party inspection and ongoing monitoring of up to fifty-five online gambling operators licensed by the Mohawk jurisdiction located near Montreal, Canada.

KGC chairman Dean Montour said that he was pleased that licensees, many of them major companies in the online gambling industry, had shown a strong commitment to a compliance system that met or exceeded international best practice standards.

“Our first step in implementing the new scheme, which we have titled the Continuous Compliance Program, has been the appointment of eCOGRA as an Approved Agent in terms of section 140 of our Regulations to assist in the application of the program, and submit reports of its findings to the Commission,” Mr. Montour revealed.

“The KGC has a long-standing working relationship with eCOGRA and is confident in eCOGRA’s ability to effectively implement the Continuous Compliance Program while ensuring that all information received from operators is held in the strictest confidence.

“eCOGRA is a non-profit standards and player protection company that has a substantial staff of professionally qualified and industry-experienced Chartered Accountants who have completed hundreds of compliance inspections over the past six years,” Mr. Montour continued. “The company, which is itself reviewed annually by KPMG, has the resources to assess compliance and conduct monitoring programs to ensure game fairness and adherence to key KGC objectives, and is eminently suited to the task.

“In 2007 eCOGRA was appointed by the European Gaming and Betting Association, a highly respected representative of the leading European gaming and betting operators, to implement a similar continuous compliance program for all its members. This program, involving some of the largest companies in the business, has proved very successful and is now in its third compliance cycle,” Mr. Montour said, adding that this has enabled EGBA members to confidently demonstrate that they operate at standards that match or exceed those of European Union state gambling monopolies.

The Kahnawake Continuous Compliance Program includes all authorised games and has three elements:

3. Ongoing analysis of the live gaming data to ensure authorised games are random and fair, and return to player ratios are correctly assessed and maintained through a continuous monitoring program of operational data.

eCOGRA Chief Executive Andrew Beveridge said the compliance activities of the company fell directly under the authority of the 4 Independent Directors on the Board, all of whom were highly experienced in the industry.

“The KGC and its licensees have demonstrated a great determination to achieve best practice standards, and we respect the commitment that has so far been shown,” he said.

“Our extensive work with our own eCOGRA-accredited operators and those of EGBA has repeatedly illustrated that the right standards, professionally and diligently applied and maintained by an independent third party, produce outstanding results that enhance the reputation and productivity of participating companies.

“We look forward to the considerable task ahead and have almost completed 4 initial test reviews that have generated enthusiastic feedback from the operators concerned. The most important aspect of this program is that players will be safer, and that can only be to the credit of the industry.”

The Mohawk Territory of Kahnawake is a sovereign jurisdiction located just outside Montreal, Quebec, Canada. The Kahnawake Gaming Commission was established in 1996 and has been continuously licensing and regulating online gaming since July, 1999 – longer than almost any other jurisdiction in the world.

Operators that are licensed by the Commission host their equipment at Mohawk Internet Technologies, a world class ISP and data centre located within the Mohawk Territory of Kahnawake: www.mohawk.ca

The Commission’s Regulations concerning Interactive Gaming were developed in consultation with Frank Catania, a renowned expert in the regulation of online and terrestrial gaming. The Commission is comprised of three members appointed by the Mohawk Council of Kahnawake and, in addition to its roster of full-time employees, fulfills its mandate with the assistance of a number of Approved Agents, including eCOGRA.

For more information about the Commission go to: www.gamingcommission.ca

Over 140 gaming websites and their associated software suppliers and operators are currently reviewed by the London-based eCOGRA, which is predominantly staffed by Chartered Accountants from Big 4 audit firms with appropriate online gambling industry and auditing experience and training.

eCOGRA’s constitution ensures that all compliance matters are strictly under the control of the Independent Directors comprising the Audit and Seals Compliance Committees.

eCOGRA is recognised as an accredited testing agency by various online gambling jurisdictions and has advised numerous jurisdictions on compliance matters.

KPMG London, as a recognised international accounting firm, performs an annual quality assurance review of eCOGRA to ensure that the governance structure, responsibilities, processes and approach implemented within the organisation are in line with best practice and industry requirements, and comply with recognised audit practices and principles.