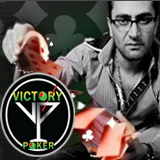 1 April 2010 (ST. JULIAN’S, MALTA)- Since its launch on February 1st, VictoryPoker.com has added several new personalities to its impressive ensemble. Later this year, one new member will be taken into the fold, as everyday poker players will have a chance to compete for $100,000 in tournament entries, cash, a sports car, wardrobe, and a condo on the Las Vegas Strip. For more information on this challenge, view the promotional video and stay tuned to http://www.victorypoker.net.

Jonathan Little and Canadian Pro Jason Lavelle are the latest poker superstars to join the ranks. Little, the World Poker Tour Player of the Year, has more than $4 million in tournament winnings and also hosts a training website.

Little and Lavelle bring the number of Team Victory members to twenty. Together they boast 54 titles, 465 cashes, and $29,723,643 in earnings.

With more than $29 million in combined winnings, Team Victory members have graced the covers of prominent magazines, authored bestselling books, and often appear on networks such as NBC, Fox Sports, GSN, Sky Sports, Forbes, and ESPN. Known for extravagant lifestyles and the “We made it — We’ll show you how” motto, Team Victory is standing by its promise.

With an estimated 60 million Americans playing poker, it’s also the third most watched competition in the world, and VictoryPoker.com is now on course to be the next online contender in a $55 billion industry. As one of the newest online poker rooms, it’s the biggest brand to join the Everleaf Network. Everleaf’s traffic has steadily increased since VictoryPoker.com’s inception. And by year’s end, it could become one of the top ten US friendly poker networks and one of the biggest online poker stories of the year.

To celebrate its launch in London, VictoryPoker.com is sponsoring the iGaming Social on 8th April held at No 5 Club.

For complete biographies on all Team Victory pros, players, and consultants visit http://www.victorypoker.net/

About Victory Poker
VictoryPoker is the coolest virtual poker card room duly regulated and licensed by The Everleaf Poker Network established in 2004. Everleaf is licensed and regulated by the Lottery and Gaming Authority of Malta and meets the stringent e-gaming guidelines and restrictions of the European Union (EU). With innovative graphics, superior customer service and a safe, secure interface, the software is crafted to enhance and personalize the online poker experience. Although virtual poker is legal where the games are hosted and played, it may not be legal where individual players are located. It is each player’s responsibility to determine whether or not such games are permitted under his/her local jurisdictional laws.

“Team Victory” is a select group of the world’s finest poker players and industry professionals representing VictoryPoker.com around the globe.