To the winner go the spoils: cash, car, clothes, and a condo on the Las Vegas Strip 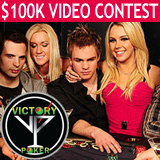 17 May 2010 (Malta) – Victory Poker is offering more than $100K in prizes in a video contest created to find the next member of its Team Victory. Wannabe poker playboys are invited to submit a video clip explaining why they should be the next Team member. The stakes are high with a sports car, designer wardrobe, a condo on the Strip in Vegas and $100,000 in tournament entries going to the player chosen by Antonio Esfandiari and his team that includes 2007 Playboy Playmate of the Year Sara Underwood. Poker players that think they’ve got what it takes can find further information and submit their entry at www.victorypoker.net where anyone can view the clips submitted to date.

Since its launch on February 1st, VictoryPoker.com has added several new personalities to its impressive ensemble. In January, former Who’s Your Daddy CEO Dan Fleyshman spearheaded the online project and secured a license with the Everleaf Poker Network. He then recruited a healthy mix of tournament veterans, online name makers, and young cash game specialists to represent the site. The first string included team quarterback Antonio Esfandiari, along with frontmen Andrew “Good2CU” Robl, Keith “The Machine” Gipson, PLO specialist Brian Rast, the controversial Dan “Blitz” Bilzerian, and longtime tournament slayers Paul Wasicka and Lee Markholt. Soon after, 2007 Playboy Playmate of the Year Sara Underwood — currently in training — lent her penchant for poker and obvious aesthetics to the field.

Jonathan Little is the latest poker superstar to join ranks. With more than $4 million in tournament winnings, the World Poker Tour Player of the Year also hosts a training website. Little brings the number of Team Victory members to nineteen. Together they boast 53 titles, 445 cashes, and $28,722,911 in earnings.

Biographies of all Team Victory pros, players, and consultants are posted at http://www.victorypoker.net/.

Victory Poker is the biggest brand to join the Everleaf Network whose traffic has steadily increased since VictoryPoker.com’s inception. At the rate it’s growing it will be one of the top ten US friendly poker networks by the end of the year.

About VictoryPoker.com
VictoryPoker.com is host to a virtual poker card room service for those who wish to test their skills against others for fun, prizes, or money and does not participate in betting or wagering. It is duly regulated and licensed by The Everleaf Poker Network established in 2004. Everleaf is licensed and regulated by the Lottery and Gaming Authority of Malta and meets the stringent e-gaming guidelines and restrictions of the European Union (EU).

Prev: DTD Switches from Cryptologic to GTECH G2 Poker, Casino and Payments System Next: Debate Concludes UK Gambling Policy Proposals Driven by Government’s Need for Money, Not in the Interest of Operators or Players