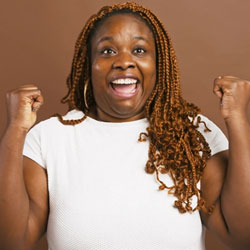 5 March 2021 (Press Release) – A 32-year-old nurse from Saldhana in the Western Cape is “completely over the moon” after hitting not one but TWO jackpots at South Africa’s Thunderbolt Casino. “Cindy” won a total of R529,557.98 playing the Storm Lords and Plentiful Treasure slots from Realtime Gaming.

Cindy said she’s not 100% sure yet what she’ll do with all the winnings but is certain that some will be donated to the animal shelter where she volunteers.

“I was completely excited and overjoyed when I hit the first jackpot,” said the winner. “I was having so much fun playing Storm Lords that I continued on and what do you know, I hit ANOTHER jackpot on Plentiful Treasure!”

When players hit the Gold Coin feature in Plentiful Treasure, like Cindy did, they know they’re going to win either the Grand, Major, Minor or Mini jackpot. They’re given 12 coins to click on to reveal symbols for each jackpot.  Three matching symbols wins the jackpot.

“My husband also plays at Thunderbolt sometimes and now he is really adamant to get so lucky and hit two jackpots in a row, just like I did!”

Cindy had this advice for other players: “Don’t underestimate your luck!  For a long time, I always only heard stories about such lucky players and now I’m one of them.”

Until the end of March, all active players can take 30 free spins on Diamond Fiesta from Realtime Gaming. They’ll even earn double comp points whilst playing March’s Game of the Month.

Diamond Fiesta is a Mexican-themed game with Expanding Reels.  Scatters trigger free spins with extra Scatters, Wilds and Diamonds. Diamonds in all four corners cause the grid to expand to eight reels and four rows.

With hundreds of slots and table games from Realtime Gaming, all played in Rands, and customer service in both English and Afrikaans, Thunderbolt is one of South Africa’s most popular online casinos.

About Thunderbolt Casino (http://www.thunderboltcasino.com)
Launched in 2014 and acquired by the Springbok Group in late 2015, Thunderbolt Casino is a South Africa facing online casino with download, instant-play and mobile casino games provided by Realtime Gaming (RTG).  Thunderbolt welcomes new players with up to R10,000 in welcome bonuses. Player support is available round-the-clock via telephone and live chat.  Thunderbolt’s mobile casino supports all Apple and Android smartphones and tablets.