After inching up slowly all summer, progressive jackpot reaches highest in months 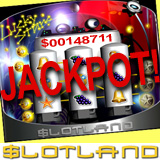 “I’m so excited I can’t think straight,” said the winner, known as SOUTHBELLE. “I’m sure not used to having that kind of spending money so I really don’t know what I’ll do with it! I’m terrible for spoiling my family. Can’t help it! So I’ll have some fun with this that’s for sure. First though, my brother has been going through some tough times lately so I’m going to help him with some of the bills that have piled up.”

Lucky Stars is a five-payline slot machine game giving five chances of winning. Each payline which has a bet placed on it can win. Its “Hold” feature appears randomly during play and there is a special bonus round multiplying all wins by 10. Although Lucky Stars is one of the oldest and most popular games at Slotland, it hasn’t had a big progressive jackpot winner since December 2007.

“People play a little less in the summer so the progressive hasn’t increased as fast as it has shot up a few times in the past,” said Slotland Manager Michael Hilary. “But it was worth waiting for I’d say! Last fall it was getting hit pretty well monthly so we weren’t seeing six-figure jackpots like this. We had a $168,476 winner in May but other than that this is our biggest win since last October.”

“I like playing Lucky Stars because there’s a bit of slots strategy involved,” said the winner. “When you get the ‘hold’ feature you have to decide whether or not to keep what you’ve got or take your chances on another spin. Bonus rounds multiply wins so if I feel like I’m close to hitting one I like to make sure I’m betting max to make the most of it.”

Slotland.com currently features 15 one-of-a-kind slot machines and video poker games. Four of the most popular games, including Lucky Starsd, are also available on mobile phones and PDAs. Slotland’s games do not require any downloading or installation as they are all instant play casino games. Some are now available in Flash format with improved graphics and sound.

The jackpot at Slotland was reset to $50,000 after this win. At Slotland’s sister casino WinADayCasino.com, whose games are accessible from the Slotland games lobby, the jackpot is currently over $85K.

About Slotland.com
Established in 1998, Slotland.com is renowned for its fairness, security and sincerity. Slotland.com’s progressive jackpot is won on average every six weeks and usually stands at over $100,000, making it one of the most frequently won jackpots on the Internet. In 2005, the pioneering entertainment company introduced its first slot machine for the mobile phone/PDA platform. Slotland.com has been voted “Most Unique Slot Site” and “Best Progressive Jackpot Site” by Strictly Slots Magazine readers, named “Best Web TV” in a Gambling Online Magazine poll, and selected as a finalist in the ME Awards “Best Mobile Gambling Company” category. In 2007, Slotland.com launched WinADayCasino.com, a whole new kind of online casino experience with whimsical, outrageously unique slot machines and video poker games and its own progressive jackpot pool.