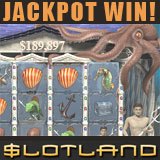 12 September 2012 (London, UK) – When the progressive jackpot at Slotland.com was nearing a record level at the end of August it was inevitable that it would be won soon. Although Abigail J. was shocked when she won the $189,897 jackpot, staff at Slotland saw it coming. The lucky jackpot winner was playing one of the popular slots and video poker site’s newest and most elaborate no download slots, Pearls of Atlantis, when she hit the jackpot.

Pearls of Atlantis is a 5 reel, 9 payline slot with a ‘Wheel of Fortune’ bonus game. Like most games, a max bet must be placed to qualify for the progressive jackpot. Although Abigail doesn’t always bet max she’s certainly glad she did this time.

“I usually bet lower amounts when I play slots as I simply enjoy the thrill of playing and seeing the symbols fall into place,” said the excited jackpot winner. “That day, though, I felt somehow lucky so I decided to up the bets for some rounds. I was nervous but I had some smaller wins – and then all of a sudden I was looking at the jackpot! Gosh, was it a shock! Now I’m happy as a bee and grateful to have won such a fantastic amount. Slotland is the best!”

“I’ll put some of the money aside for more play,” she said. “And I’ll pay some bills. But I’m also going to take a course in open water diving in the Bahamas or Fiji or some other tropical destination! I won the jackpot playing Pearls of Atlantis so maybe I’ll get lucky again and discover the lost continent!”

Unlike other casinos’ jackpots that never seem to be won, Slotland’s jackpot doesn’t usually accumulate for more than eight weeks or so. Over the years, the average win has been about $150,000. Last November, Henry W. won $207,241 — Slotland’s biggest jackpot ever — playing Treasure Box, one of the popular casino’s very first real money slot games.

“Naturally we never know when our jackpot will be hit – it’s all down to luck,” said Slotland Manager Michael Hilary. “But since it’s been hit so regularly for so many years both our staff and our many long-term players just get a feeling when it’s about to be won again. We had that feeling a couple of weeks ago and, as usual, it turned out to be right! Abigail has been a regular player at Slotland for many years and we’re all absolutely thrilled about her win.”

Slotland’s jackpot increases quite quickly again after it’s reset to $50,000 following a win since most of the casino’s slot games are tied to the one jackpot. Slotland offers twenty-six one-of-a-kind online slots and video poker games. Several are also available as mobile slots. A new auto-racing themed game will launch later this month.