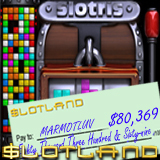 July 30, 2009 (London, UK) – Less than a month after their last big progressive jackpot winner, the Slotland jackpot has already been hit again. A player known as MARMOTLUV won $80,369 playing one of Slotland’s newer online slot machines, the Slotris.

“I used to love playing Tetris as a kid so I’ve enjoyed playing Slotris ever since it was added to Slotland,” said the excited winner. “I’ve won lots of smaller amounts over the years I’ve been playing at Slotland, but I never dreamed I’d actually win such a huge jackpot! The money is already in my bank account – but not for long!”

For years the Slotland jackpot was famous for being hit every six weeks or so, usually for between $100 and $150K. This isn’t the first time that the wins have happened more frequently than that though. Last fall there were three six-figure jackpots in a row so this latest win could be the part of a continuing loose jackpot trend.

Since all 16 games at Slotland contribute to the same jackpot pool, it can grow very quickly. After a young couple won a $169,923 jackpot playing the new Megaspin game in July, the jackpot was reset to $50,000 and quickly rose to the $80K prize just won.

Slotris, a Tetris-like online slot machine that launched last year, is two games in one, both inspired by the popular game of falling-blocks considered by some to be the best video game ever. The wheels on the Slotris online slot machine spin the familiar multi-coloured cubes and the same squares fall into place on the grid of the adjacent bonus game puzzle — just like the video game that has mesmerized millions for decades.

There are two ways to win Slotris. There’s a traditional three-wheel single payline slot line with spinning symbols – coloured blocks rather than cherries. When three matching symbols line up, the player wins. But the coloured boxes don’t just spin on the slot machine wheels. Afterward, the same symbols fall into place in the grid beside the slot machine. Players can win this bonus game by guiding the blocks into place. Every solid-colour line multiplies the player’s bet and ten lines wins the jackpot.

In August Slotland will introduce another new slot machine. The Reel Riot is a single payline slot machine with a “Double Wild” bonus symbol and a special “hold” feature that strategic slots players will love.

The jackpot at Slotland is currently over $64,000. Meanwhile at Slotland’s 3D casino, WinADay.com, the jackpot is over $130,000 and many players believe it is overdue for a win.