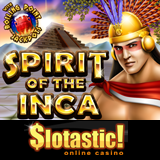 December 12, 2012 (London, UK) – A Priestess and an Incan Spirit guide players to opulent riches hidden amongst ancient temples in the latest new game at Slotastic Casino. The new Spirit of the Inca is the first from RTG to have the new Boiling Point jackpot feature that shows players just how hot the game’s five networked jackpots are at any given time.

To try the new game, players can claim a 100% deposit bonus up to $300 by using the coupon code SPIRITOFINCA when they deposit. (Valid until December 16th.)

The Priestess and the Incan Spirit are lusciously animated symbols. She is the Scatter and he is an expanding Wild that triggers up to 75 free games with prizes x 10. 15 bonus symbols will appear when the Incan Spirit appears on both reels 1 and 5. Players choose symbols to reveal their bonuses: up to 25 free games, x1 to x10 prize multipliers, a Wild Reel or an extra Wild on each reel for the free games.

“I like this new ‘Boiling Point’ feature in this game,” said Slotastic’s manager. “There’s a meter showing how close the jackpots are to being triggered. It’s pretty exciting if it’s about to blow just as you’re playing! I’m sure we’ll see this feature in many more new slots from Real Time Gaming.”

Slotastic welcomes players from around the world. Although it specializes in slots games there’s also a complete selection of table games like Blackjack, Baccarat, Craps and Roulette.

About Slotastic (http://www.slotastic.com)
Slotastic is a full-featured online casino offering the best games and some of the biggest progressive jackpots available online. Although the site focuses on slot machines and regularly presents Slot-of-the-Week bonus promotions, it has a complete selection of casino games in instant and download, free and real money formats. Slotastic offers more than 300 slot machines and table games from Real Time Gaming.