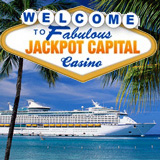 3 April 2012 (Nicosia, Cyprus) – A lucky pensioner is $50,000 richer today after a phenomenal winning streak playing online slot machines at JackpotCapital.eu last night. Bernie C. deposited just under $200 at the beginning of the evening and after several large wins on a variety of slots games he increased his bankroll by over $50,000.

The fortunate slots player said he thinks his wife deserves a cruise so that’s what he’ll do with his winnings.

“When I think of how hard I worked to earn a buck all those years…” said the winner. “And then I go and win a year’s salary just having fun playing slot machines on the computer!”

After making his deposit for the evening, Bernie played his balance up to over $14,000 in less than an hour.

“I was tempted to quit while I was ahead, but I just had a feeling I should keep playing while luck was on my side,” he told Jackpot Capital manager Oliver Smith.

Bernie’s first big win of the night was a $16K spin on Crazy Vegas, a five reel, twenty pay line slot machine with a free-spins bonus game, a random jackpot and images of Las Vegas like Elvis Presley and showgirls spinning on its reels. Shortly after, he had an even bigger win on Diamond Mine Deluxe, a single payline slots game with classic slots symbols like bars and cherries. His $45K win is the largest jackpot that can be won on this game and Bernie won it by placing a max bet and spinning two multiplier symbols as part of a winning combination.

Jackpot Capital’s $50,000 “Where’s Bunny” Easter promotion continues until April 8th. Just by playing casino games, Jackpot Capital players earn points that advance them through this bonus game. Until April 8th, points are multiplied x5. The promotion is designed so that players at every budget level have a chance to win.

Jackpot Capital, which welcomes slots players from around the world, is a full-featured online casino that focuses on slots games and special promotional offers for slots players. It has more than 300 games provided by Real Time Gaming (RTG) including million dollar progressive jackpots such as Jackpot Piñatas, Caribbean Hold´em, Mid-Life Crisis, Shopping Spree and Aztec’s Millions.

About JackpotCapital.eu (http://www.jackpotcapital.eu)
JackpotCapital.eu Online Casino offers over 300 exciting games, including many progressive jackpots such as Caribbean Hold´em, Mid-Life Crisis, Shopping Spree and Light Speed, and hosts slots tournaments played on some of its most popular slot machines. Every casino game comprises state-of-the art graphics and sound to provide a unique gaming experience. Instant-play Flash versions are available for most games. With its variety of deposit options, JackpotCapital.eu is capable of serving players from all over the world.