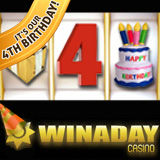 11 June 2012 (London, UK) – WinADayCasino.com has grown and changed a lot since it launched four summers ago but one thing is the same: the casino games are completely unique and only available at WinADay Casino. During the birthday celebrations this month the innovative entertainment site will launch another new game and is offering outstanding birthday bonuses.

“It’s funny looking at screenshots of the original 3D casino that we launched with in 2008,” said WinADay manager Michael Hilary. “We had a three-dimensional lobby with just two slot games in it and animated casino staff moving about between them.”

“We focused on developing and adding new games. Over the last four years we’ve created more than 30 new games,” said Hilary, clearly proud of the casino’s amazing development. “We got to a point awhile back where the 3D lobby idea just wasn’t working anymore. There was no room to squeeze in any more games so we had to re-model!”

Today, Win A Day Casino has 31 unique instant play casino games , most of them connected to one frequently hit progressive jackpot which is currently approaching $100,000.

Birthday celebrations began earlier this month with free chips and continue through the month with 50% Happy Hours this week and Father’s Day casino bonuses this weekend. A brand new game will be announced next week.

About WinADayCasino (http://www.winadaycasino.com)
A product of Slotland Entertainment S.A., WinADayCasino.com is a whimsical instant-play Flash casino offering unique free and real-money slot machines and card games that are available only at WinADay. All of the one-of-a-kind games are tied to one progressive jackpot. Generous deposit bonuses, game-of-the-month bonuses, daily random draws bonuses and frequent six-figure progressive jackpot wins have made this casino popular around the world. WinADay’s affiliate program is managed by SlotlandAffiliates.com. WinADay players interact with each other and receive special casino bonuses on Facebook: www.Facebook.com/WinADayCasino.