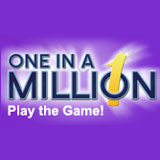 9 November 2011 (LONDON, UK) – After extensive customer feedback, One in a Million (www.OIAM.co.uk), the first online mass multi-player game show with prize pools up to £1,000,000, has re-launched with additional features including an integrated chat system, improved graphical content and games that run every hour.

Regulated by the UK Gambling Commission, One in a Million (OIAM) is a new peer-to-peer online feature game that fuses elements from other popular games like bingo, poker, the lottery and game shows like Deal or No-Deal. New game features bring together the ease and playability of bingo, the nerves of steel from poker and a deal or no-deal feel, where users can leave the game at any time (as long as they are still in play).

This video demonstration of the unique game is also available at: http://www.oiam.co.uk/how-to-play

One in a Million is a multi-player game with unrivalled odds. Quite simply it is a player vs player random elimination game. Players can buy up to 9999 seats per game for a cost of 1p, 10p, or £1. Over a 10-round period the seats progress to win prizes. In each game the prize pool is made up by those that have entered with a maximum prize pool up to £10,000, £100,000, and £1,000,000 respectively. Throughout the game players have the choice to collect your prize at the end of each round. However by choosing to continue to the later rounds they have a greater chance of winning larger cash prizes. The greater the risk, the higher the reward.

For more info on the OIAM Affiliate Program and to trial OIAM for a chance to be One in a Million Visit: http://www.oiam.co.uk.

Andrew Denbigh, One In A Million
andrew@oiam.co.uk