Interval between jackpots a little longer than usual, but well worth waiting for 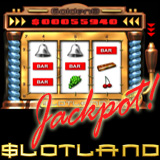 25 May 2010 (London, UK) – After tantalizing players for several weeks, the progressive jackpot at Slotland.com has been hit again for $163,476. A player known as “YUKON”, who has only been playing at Slotland a little over a year, won the jackpot playing one of the popular casino’s oldest and most popular slot machines, the Golden 8. Normally won every six to eight weeks, the last six-figure win was in early February. For several weeks many players at the all slots and video poker site had been expecting it to be won any minute.

Although the progressive jackpot is usually won by the time it reaches $150,000, the winner didn’t mind waiting just a little longer to receive significantly more.

“Of course you always hope you’re going to win a big one someday. After all, that’s why we play!” said the winner. “But I honestly never really expected something like this to happen to me! Even when I saw it on my screen I could hardly believe it! It wasn’t until the Customer Service Rep at Slotland contacted me that it really started to sink in.”

YUKON plans to pay off some debts with his winnings and to go someplace sunny and warm for a holiday.

Last year Slotland paid out nearly $800,000 in progressive jackpot wins. This is the second major jackpot win on the Golden 8 slot. Treasure Box has produced three big jackpot winners in the last couple of years, and two players have struck it rich playing the Jacks or Better video poker slot game.

“I don’t waste my money trying to win million dollar jackpots at other sites,” said one Slotland player. “The reason some of those are so big is that they are rarely, if ever, actually won. But Slotland has a big winner every few weeks, it seems, so I feel like I actually have a chance to win here. ”

Slotland.com currently features 15 one-of-a-kind slot machines and video poker games. Four of the most popular games are also available on mobile phones and PDAs. All of Slotland’s slot machines give players the option of placing a maximum bet for a chance at the progressive jackpot. They’re all instant play casino games with nothing to download or install. Some are now available in Flash format and fully compatible with iPhones.