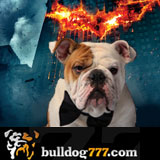 20 July 2012 (London, UK) – Ever since Bulldog777.com launched the new The Dark Knight video slot from Microgaming it’s been easy to find the online casino’s charismatic mascot, “Triple 7”. The high rollin’ canine playboy — known as “the most interesting dog in the world” — has been in his penthouse playing the deluxe new game based on the legendary motion picture from Warner Bros. Pictures. The Dark Knight video slot game features Cinematic spins and an impressive 4-tier progressive jackpot. A video preview of the game and free Batman wallpapers are available on the casino’s Facebook page: www.Facebook.com/Bulldog777.

“C’mere mon cheri, look at this,” grunted T7 as he demonstrated the new game to a particularly lovely lady he entertained recently. “You spin the reels and next thing you know you’re racing through the city in the freakin’ Batmobile. Love it. Woof. Now scratch my back, would ya?”

“Triple 7” isn’t the only one enjoying the new game – it’s also a hit with Bulldog777.com players.
“I thought this game looked great – and then I popped it up to full screen size. WOW!” said one player. “Most games look like crap if you expand them to full screen size but this one makes me want to go out and get a bigger, sharper monitor!”

“When I first read about the Cinematic Spins thing I thought ‘whoopee’. So some of the symbols on the reels are going to be animated. Cute. But been there, done that. And then, turns out it’s actually quite cool! As the reels spin, they sort of fade back a bit and a big video makes you feel like you’re soaring over Gotham City right beside the caped crusader! The visual effect is so well done – if you’re afraid of heights it just might make you queasy!”

“The Dark Knight” is based on the DC Comics character Batman, who was first seen in Detective Comics back in 1939 and since then has become a globally recognised icon, related to by fans around the globe. Today, Batman is featured in 15 monthly comic books from DC Entertainment, versions of which are translated in 30 different languages and distributed in over 60 countries to millions of fans. “The Dark Knight” film was released in 2008, becoming the third highest grossing film of all time in the US, with over $500m in domestic box office takings, and over $1bn worldwide.

The Dark Knight Online Slot may be the most popular game at Bulldog777.com this summer, but there are dozens of other slots games to choose from as well as a wide selection of table games. Bulldog777 has an integrated wallet system so players can use the same account in its poker room (on the recently upgraded Merge poker network) or to bet on over 4000 live in-game betting events in its sportsbook. Bulldog777.com offers customer service in Russian and English.

BATMAN and all related characters and elements are trademarks of and © DC Comics. © 2012 Warner Bros. Entertainment Inc. All rights reserved.