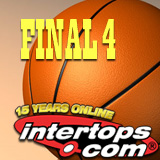 April 1, 2011 (St. Johns, Antigua) – The climax of the college basketball season is upon us at last, but fans can still place their March Madness bets at Intertops Sportsbook and qualify for the world’s first online Sportsbook’s free Final Four Contest and $5000 March Madness Draw. Every dollar bet on the Final Four weekend is an entry in the draw for a trip to next year’s Final Four showdown, and those wagering at least $500 in total on the March Madness action are automatically entered in a draw for $5000 cash with no rollover requirements. Until April 4th, everyone wins with the Final Four Bonus that gives players an additional free 20% deposit bonus up to $100.

“We got more entries than ever into our Bracket Contest,” said an Intertops oddsmaker. “Quite a few people predicted the outcomes of the East and West region second round games, but then things got more difficult. The Southwest region was altogether tougher to call and the Final Four lineup is very much a surprise.”

“None of the number one and number two seeds made it to the Final Four, while the VCU Rams — a number 11 seed in the Southwest region – have made it to the showpiece event this weekend. You see why they call it March ‘Madness’!”

Even if no one correctly predicts the outcome of all 63 March Madness tournament games, Intertops will split the $25,000 March Madness Bracket contest prize money between the 25 players with the highest number of correct picks.

Every dollar wagered on March Madness games at Intertops until April 4th is one entry in a free draw for a 2012 Final Four Weekend prize package. The package includes hotel accommodation, 2 top tickets to the Semi-Finals & Final Game and expenses for flights. Contest details and basketball bet offers are available at http://www.intertops.com/sportsbook

Intertops, which recently celebrate the fifteenth anniversary of the day it took the very first online sports bet, welcomes players from around the world. It is known for quick, hassle-free deposits and withdrawals and excellence in customer service.