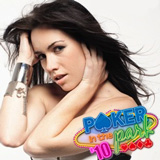 18 August 2010 (London, UK) — Model and poker champion Liv Boeree will cut the ribbon at the opening ceremony of Poker in the Park on 2nd September, 2010. Liv will declare the world’s biggest poker fair officially open at 4pm on Thursday, so for early birds there’ll be plenty of opportunities for photos and autographs.

Liv rocked the poker world last May when she won the EPT San Remo Main Event for a cool £1 million. A woman of many parts, as well as a model and TV presenter, Liv is also an astrophysics graduate and heavy metal guitarist. Her career live tournament cashes currently exceed £1,930,000.

In its fourth year, Poker in the Park expects to attract 20,000 poker fans over two days, and will fill London’s Leicester Square with sit-n-go poker tournaments running around the clock, lectures from big name pros, tuition tents, stalls selling the latest poker merchandise and much much more.

Details are available at www.PokerinthePark.com

About Poker in the Park (www.pokerinthepark.com)
2010 will mark the fourth anniversary of Poker in the Park. Held 2-3 September in Leicester Square, the event draws 20,000 poker enthusiasts to participate in fun, free poker tournaments and enhance their poker skills through free poker lectures taught by the biggest pros in Europe.
Twitter: http://twitter.com/pokerinthepark.