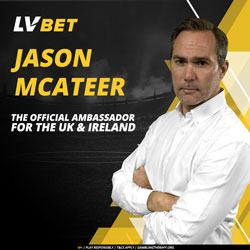 McAteer, who appeared at the 1994 and 2002 FIFA World Cups for Ireland and won 52 caps for his country, will provide expert insight and match previews exclusively via LV BET’s channels, beginning with UEFA Euro 2020 and then throughout the 2021-22 season.

McAteer will also share experiences from his more than 400 career appearances at the likes of Liverpool, Bolton Wanderers and Sunderland with LV BET through a series of interviews that will be seen on the bookmaker’s blog and on social media.

Milestones include his memorable goal against the Netherlands that secured Ireland’s place at the 2002 World Cup as well as appearing for Liverpool in the 1996 FA Cup Final alongside the likes of Robbie Fowler, Steve McManaman and John Barnes during a four-year spell with the team he supported as a boy.

McAteer said: “This promises to be a thrilling summer of football, and I’m very much looking forward to linking up with LV BET during the Euros and giving my views on the great players on show and the fabulous matches we are anticipating. It’s an exciting time, with fans returning to stadiums, so I am thrilled to be sharing my thoughts on the game we all love ahead of the Euros and into the 2021-22 season.”

McAteer’s cooperation with LV BET as an ambassador will focus primarily on the operator’s social media channels and in association with its sponsorships. Fans of the former player, Ireland and his former clubs can look forward to a wide range of activations in the coming year.

LV BET operates across Europe with a number of sponsorships and sees this ambassador partnership with McAteer as part of its strategy to grow in both the UK and in Ireland especially.

Marcin Jablonski, COO of LV BET explained: “Jason is a valuable addition to the LV BET team as a brand ambassador, bringing a wealth of expertise from a playing career that lasted more than 15 years. Having played at two World Cups and spent almost a decade in the Premier League, our followers can look forward to hearing his views on the Euros and throughout next season’s football, both domestic and international.

“Our customers will benefit from being able to engage with Jason’s match previews and opinions and interact with Jason during the partnership. Teaming up with Jason will enhance our credibility in the UK and Ireland market and increase brand awareness.”

LV BET boasts a sportsbook product with a wide range of pre-event and in-play markets to choose from as well as plenty of games for players to enjoy.

The operator is the official betting partner of England’s Vanarama National League, in a deal that is now into its second season. LV BET has previously sponsored the German national team in ice hockey and Kölner Haie, a team from the Deutsche Eishockey League. In Poland, the bookmaker is the main sponsor of Wisla Krakow and Slask Wroclaw, and previously sponsored the European Volleyball Championship – EuroVolley Poland 2017.

LV BET is an established brand in the iGaming field based in Malta and offices across Europe. It offers a fresh perspective on the industry along with a customer-oriented approach to business. Its first and most important rule is: our customers are the heart of the whole LV BET company. That is why LV BET puts its clients first and always delivers the most reliable customer service.  https://lvbet.com/