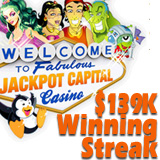 24 March 2011 (Nicosia, Cyprus) – Most regular online slots players have their good nights when they get lucky and have a fun winning streak. But, to win $10,000 or more on every game you try is every online casino player’s dream. This dream came true at JackpotCapital.com last week when one lucky player tried six online slot machines during a two-day period and walked away with a total of $139,957.77 in winnings.

“I had played Aladdin’s Wishes before. In fact, I had a bit of luck on it last time I played so I started there. I couldn’t believe it when I won $29,305!” said the winner from the undisclosed tropical resort where he and his wife have gone to start enjoying their good fortune. “I never have the kind of luck! My wife told me I should quit while I was ahead but I thought, what the heck, I think I’ll just try one more game before I log off. So I played Count Spectacular for a bit.”

It was not long before Armin B. had racked up $9,980 in winnings on Count Spectacular. He went on to win $10,020 playing Goblin’s Treasure and then his unbelievable good luck continued when he won $25,593.77 playing Mystic Dragon. After winning more than $45,000, he called it a night. Next day, still in shock over his run of luck the night before, he decided to take a few spins on the Texan Tycoon slot machine and started winning right away. That day he also played Pay Dirt. He added another $21,394.50 to his winnings playing Texan Tycoon and a staggering $43,665 on Pay Dirt for a grand two-day total of $139,957.77

“We often see players have winning streaks,” said casino manager Oliver Smith. “Sometimes Lady Luck just smiles on you! However, this really is an incredible run of luck. He won a lot of money and it sounds like he had a lot of fun in the process. We couldn’t be happier for him!”

JackpotCapital.com is home to the biggest progressive jackpots available online to US players. At over $1.6 million, the Jackpot Piñatas jackpot is the largest jackpot available, but two other jackpots have also reached seven-figures. The Aztec’s Millions jackpot and the jackpot tied to both the Mid-Life Crisis and Shopping Spree slots are all well over $1 million.

Prev: WinADayCasino’s Game of the Month Has $165,900 Jackpot Winner Next: EveryMatrix Acquires Bingo and Poker Software Developer Miles Ahead