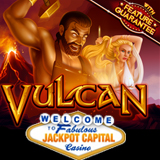 March 4, 2013 (Nicosia, Cyprus) – Sparks are flying in Vulcan, the latest feature-loaded game at Jackpot Capital Casino. The new slots game, a tribute to the Roman god of fire, has several features built into it that give players more playing time – and multiply their winnings. Vulcan is a five reel, 25 pay line slots game with two random jackpots.

“Goodness gracious, great balls of fire,” laughed Jackpot Capital Casino manager Oliver Smith. “I can’t believe how many ways there are to win free spins and prize multipliers in this game! The bonus rounds are guaranteed to come up at specified intervals and you can even attempt to trigger them yourself whenever you think the gods are smiling.”

Vulcan himself is the animated Wild symbol. In ancient Roman religion and myth, he presides over lava, smoke, and volcanoes. As in this new game, he is often depicted with a blacksmith’s hammer. The prize is tripled when one or more Wild Vulcan symbols appear in a winning combination.

Popular around the world for many years now, the Jackpot Capital Casino website has just had a complete facelift. The stylish new design makes it even easier for new players to get started by giving easy access to a wide selection of free instant-play casino games.

The Three Stooges II slots game and the new American Roulette are among the casino’s most popular games. With a total jackpot pool well over $6.4 million, Jackpot Capital players have a chance to win some of the biggest progressive jackpots available online including the Aztec’s Millions progressive that is currently nearly $1.5 million.

Until March 31, players can claim a 100% (up to $200) casino deposit bonus by entering coupon code JCNEWLOOK when they make a next deposit.

About JackpotCapital.eu (http://www.jackpotcapital.eu)
JackpotCapital.eu Online Casino offers over 300 exciting games, including many progressive jackpots such as Caribbean Hold´em, Mid-Life Crisis, Shopping Spree and Light Speed, and hosts slots tournaments played on some of its most popular slot machines. Every casino game comprises state-of-the art graphics and sound to provide a unique gaming experience. Instant-play Flash versions are available for most games. With its variety of deposit options, JackpotCapital.eu is capable of serving players from all over the world.