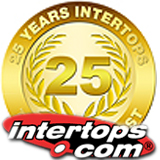 March 26, 2008 (Antigua) – The world’s first online gambling company has begun a yearlong celebration of the 25th birthday of its sportsbetting business, established in London in 1983. Intertops.com, which took the first online sports bet ever in 1996, this year also celebrates the tenth birthday of its online casino. Pioneering once again, the company accepted the first mobile bet in 2001 and added a world-class poker room in 2003. Over the years, by staying on top of trends and technology, and by paying players, partners and affiliates quickly, Intertops has earned a reputation for being exciting, innovative, trustworthy and reliable.

Two years ago, Intertops celebrated the tenth anniversary of their very first online wager, but the story actually began back in April 1983 when founder Detlef Train revolutionized the German sportsbetting market with a UK bookmaking license from London. He offered punters back home fixed odds as an alternative to the unsatisfactory offers of the state monopoly.

The World Wide Web, as we know it today, hadn’t even been imagined back when Intertops was born. The fledgling company began by sending weekly betting slips to customers in Germany who then placed their bets by phone or post. In the days before modern online payment processing, the first Intertops customers sent their stakes in cash by post. The company moved to Austria in 1992 to avoid British postal delays. “By sending betting slips to Germany, 30 million mail boxes were potential remote betting shops,” says Train.

Not long after the company set up in Salzburg, and long before many others saw commercial possibilities in the infant technology, Train was dreaming of conducting his business on the Internet.

“Everyone told me to leave it well alone,” he recalls. “They said it would only ruin the reputation of my business. But my view on life is that one shouldn’t just accept things as they are, but start questioning and looking at things from different angles. I just ignored those who asked why anyone would ever want to place a bet on the Net. And with 30 million Internet users worldwide in the mid 90s I saw more huge potential for remote betting shops.”

After the unstoppable success of their online sportsbetting business, Intertops partnered with Microgaming to offer the best available online casino games to their customers as well. In 1997, with a strong monopoly on casinos in Austria, the company had to be split up. Train stayed with the traditional betting business in Austria whereas the online part of the company moved to Antigua and started its online casino in May 1998.

In 2001, Intertops was the first to take a sports bet via mobile phone and in 2006 launched its mobile casino with many of the Microgaming online casino games adapted for cell phones and powered by Spin3.

“Our introduction of both online and mobile betting has played a major role in making the business more democratic,“ says Michl Posch, Head of Marketing. “Every citizen can now decide what he wants to do and what not. He is no longer at the mercy of state regulation. Our whole business has always been customer-centric. It has to be as convenient as possible for the customer.”

ENDS
——————————————————————————————————
Representatives of Intertops will be in London this week to celebrate the
25th Anniversary at this month’s Lyceum iGaming Business Social. Media and industry friends are welcome to join the party Thursday night at “Maya” in Soho.

For more information about the history of the Internet’s first gambling site or the
monthly promotions that will celebrate Intertop’s 25th Anniversary, please contact:

About Intertops
Intertops was founded in 1983 in London with a UK Bookmakers License and relocated to Austria in 1992. They accepted the world’s first online bet in 1996. In 1997, the online business moved to Antigua while the traditional sports betting business remained in Austria. In 2001, the innovative company developed the first igaming WAP sites, enabling it to be the first to offer mobile bets. By 2003 Intertops.com began online poker operations, progressing to online skill-based gaming in under a year.