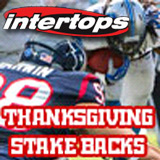 November 20, 2012 (St. Johns, Antigua) – While many Americans think of Thanksgiving as the official start of the Christmas shopping season, for sports fans betting on NFL football is as much a part of the holiday as turkey and pumpkin pie.

This Thursday’s three Thanksgiving games could be among the best in recent NFL history. First up is hot Super Bowl contender Houston’s visit to Detroit, before the Dallas Cowboys host long-time NFC East rivals Washington Redskins. After turkey dinner it’s the continuation of another famed rivalry when New York Jets host the New England Patriots.

Intertops has Stake Back offers on each of the three NFL Thanksgiving Day games: If the Texans vs. Lions game is tied at halftime, Intertops will refund losing ‘Double Result’ wagers up to $100 for this game. If there are less than 3 touchdowns scored in the afternoon Redskins vs. Cowboys game, players that lose ‘First Touchdown Scorer’ and ‘Last Touchdown Scorer’ bets for this game get their stake back up to $100. The Stake Back for the evening Patriots-Jets game – again up to $100 – is for losing ‘Total Touchdown’ bets if the first quarter is scoreless.

There have been some memorable Thanksgiving moments in NFL history. O.J. Simpson rushing for a Thanksgiving Day-record 273 yards in 1976… The Dolphins dropping 55 points on the Cardinals in 1977… In 1974, Cowboys rookie Clint Longley throwing a 50-yard touchdown pass to defeat the Redskins…

Every Tuesday throughout the Regular Season the popular sportsbetting site posts odds on the upcoming NFL games, as well as dozens of further props. Every NFL Regular Season bet is an entry in a draw at the end of the season for an amazing Super Bowl XLVII travel package that includes game tickets, luxury hotel and flights to New Orleans.

Intertops took the very first online sports bet and still gives the best odds and customer service to sports bettors around the world.