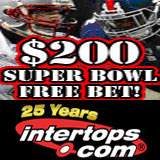 31 January 2012 (St. Johns, Antigua) – Intertops Sportsbook is giving players a $200 free bet on the Super Bowl, the world’s biggest sports betting event of the year. And that’s on top of the generous 20% deposit bonus available now till Super Bowl kick-off this Sunday. Intertops bookmakers foresee a close game with odds on the New England Patriots (-140 / 1.71) to win over the New York Giants (+120 / 2.20).

Many NFL football observers predict that the Vince Lombardi Trophy will not go to the strongest team, but to the team that can best mask its weaknesses.

“Teams try to cover up their holes in preparation because they know whatever can be exploited will be exploited,” observed Green Bay Packers star Charles Woodson.

With David Tyree’s incredible catch in Super Bowl XLII still among the most famous plays in Super Bowl history, the “Team to Score Last” bet (Patriots 1.80, Giants 1.95) could get more action than ever.

Madonna will perform at halftime and Intertops has come up with sixteen first half Super Bowl bets named after the Material Girl’s hits including the “Give it to Me” (Wes Walker to score 2 or more TDs in first half), “I Love New York” (Giants to lead by 18+ points at halftime), “Intervention” (Tom Brady to be sacked 4+ times in first half) and “Bad Girl” (Lawrence Tynes to miss 2 or more field goals). Intertops is not giving odds on Madge having a Janet Jackson-style “wardrobe malfunction”.
Win or lose, everyone that wagers $1000 or more (minimum odds: -200 / 1.5) on the historic New England Patriots and New York Giants match can claim their $200 gift just by sending a quick email to bet@intertops.eu.

Many others have come and gone since Intertops took the very first online bet fifteen years ago but it’s still one of the most popular and most trusted online sports books, casinos and poker rooms in the world. It continues to earn its reputation for courteous and efficient customer service and hassle-free deposits and withdrawals every day.