Intertops, the first online sportsbook, is giving away a trip to Miami and is taking zero margin on one NFL game per month 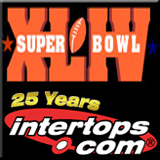 September 9, 2009 (St. Johns, Antigua) – The American football season has begun and Intertops.com, the first to ever take an online wager and still the most trusted online sportsbook anywhere, has a complete line-up of NFL odds and props, as well as a deluxe trip to Super Bowl XLIV in Miami to give away. Monthly No-Juice NFL lines begin with Thursday’s league opener.

“When we took the very first online sports wager back in 1996, we sure didn’t have all the betting propositions that we do now!” said Michl Posch of Intertops.com. “Today, we have lists of NFL odds and props, from ‘Most Wins in the Regular Season’ to ‘Players With the Most Passing Yards’ and ‘Most Rushing Yards’ and, of course ‘Super Bowl Winner’. The NFL is incredibly popular with both American and European bettors.”

Throughout the regular season, players at Intertops.com will be automatically entered in a free contest to win a dream trip to the Super Bowl in Miami, Florida next February whenever they place a wager on any NFL bet offer. The prize includes flights to Miami, four nights at a top hotel, and top tickets for Super Bowl XLIV. Intertops will also send two more football fans to the college football BCS Championship.

Apparently seriously struck by Super Bowl Fever, Intertops is also forfeiting its margin and offering one NFL No-Juice line each month. After tomorrow’s Tennessee Titans vs Pittsburgh Steelers game, the next No Juice NFL Lines will be when the Green Bay Packers take on the Minnesota Vikings on October 5th.

Super Bowl is always the biggest sports betting event of the year and the excitement starts building with the first kick-off each September. Anything can happen as the NFL season unfolds, but right now Intertops oddsmakers seem almost certain the New England Patriots will be going to Miami next February, favoring their opponent to be the New York Giants (20.0) or the Philadelphia Eagles (23.0). Complete and current NFL betting propositions are always available at: www.sportsbook.intertops.com.

Intertops.com, which also offers poker and casino games, takes pride in its long record of quick, hassle-free deposits and withdrawals and excellence in customer service.

About Intertops (www.intertops.com)
Intertops was founded in 1983 in London with a UK Bookmakers License and relocated to Austria in 1992. They accepted the world’s first online bet in 1996. In 1997, the online business moved to Antigua while the traditional sports betting business remained in Austria. 1998 saw the launch of one of the first online casinos. In 2001, the innovative company developed the first igaming WAP site, enabling it to be the first to offer mobile bets. By 2003 Intertops.com began online poker operations. In July 2009 the brand new casino was launched, with new software, new games and many exciting promotions and benefits for the players.