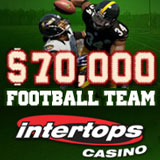 5 September 2012 (St. Johns, Antigua) – NFL football is back and Intertops Casino is kicking off the season by giving away $70,000 in prizes in its “Football Team” promotion. As always, occasional players have just as much chance to win casino bonuses as frequent players do since weekly Grand Prizes will be awarded to players on each of six scoreboard levels. The first prizes will be awarded September 11th and the giveaways continue until October 16th.

Intertops ranks players according to how much they play so that everyone can win a bonus. Every week, prize winners will be drawn in each of six levels with winners from the top category receiving $500.

Players can check their current ranking any time on the $70K Football Scoreboard where complete contest details can be found.

Twice a week, hundreds more players will get emails letting them know they’ve been given a free bonus up to $250. (Players must have played and deposited in the previous days to qualify.) Between now and October 16th Intertops Casino will give away a total of $70,000 in casino bonuses.

Intertops has more than 300 online slots games and casino games like Roulette, Blackjack and Pai Gow Poker. Its new Multiplayer Roulette has been very popular since it launched this summer.

One of the very first online casino, poker and sportsbook sites on the internet, Intertops is trusted by players around the world. For more than 15 years Intertops has taken pride in its friendly customer service and hassle-free deposits and withdrawals.