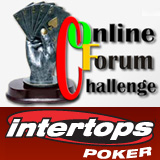 September 30, 2010 (St. Johns, Antigua) — Intertops and Global Gaming Events (GGE) have teamed up once again for what will be some of the biggest money-added tournaments ever held in the online gaming industry.

The Online Forum Challenge Mega Money Events will be a series of seven online poker tournaments over the next four months. Intertops is adding over $23,000 in amazing cash and prizes, making this the largest overall prize pool for any GGE series since it started running its massive added prize pool tournaments over four years ago.

The first set of OFC Mega Money Events kicks off in October with a $5,000 free roll on the 16th and then continues the next day with a $5.50 buy-in event with $2,000 in cash and prizes added to the prize pool. These first two tournaments will also award a total of $1,500 in prizes for the best performing affiliates.

A second set of OFC Mega Money Events will commence in November, followed by a third set in December. The last event will be a bonus $2,000 free roll for any player who plays in two of the three buy-in tournaments during the OFC Mega Money Series.

“We’re all really excited to partner with Intertops once again and bring this new Mega Money Series of events to both players and affiliates alike,” says Tara Wilson, GGE Director of Operations. GGE is the parent company that owns and operates flagship brand Online Forum Challenge. “This is a big moment for GGE, and we greatly appreciate Intertops for sponsoring the biggest series we have had to date. These OFC Events are such a great way for players to build their bankrolls, while the affiliates earn revenue by promoting these events with their own links.”

Players are required to pre-register for these events at Global Gaming Events (http://www.globalgamingevents.com) in order to participate in this Mega Money Event Series. Pre-registration is open right now for the first set of events, and details for all tournaments can be found on the GGE website as well.

About Online Forum Challenge (www.globalgamingevents.com)
Global Gaming Events was launched early 2006 and is the premier facilitator of multi-forum events. With over $700.000 in cash and prizes awarded so far, GGE brings value added tournaments to new players and depositors, while allowing affiliates to promote an operator with their own affiliate links. Currently, GGE brings thousands of players and hundreds of affiliates to any operator where tournaments are hosted. All inquiries should be addressed to support@globalgamingevents.com.

About Intertops (www.intertops.com)
Intertops was founded in 1983 in London with a UK Bookmakers License and relocated to Austria in 1992. They accepted the world’s first online bet in 1996. In 1997, the online business moved to Antigua while the traditional sports betting business remained in Austria. 1998 saw the launch of one of the first Microgaming online casinos. In 2001, the innovative company developed the first mobile betting application, enabling customers to bet with mobile phones anywhere anytime. By 2003 Intertops.com began online poker operations, progressing to online skill-based gaming in under a year. Intertops Poker offers new players a 110% bonus up to $600 and has $6 million in tournament guarantees every month.