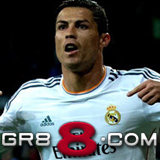 22 May 2014, London, UK (Press Release) — This year’s Champions League has thrown up a final between two teams from the same city for the first time ever, and GR88.com is backing Real Madrid to get the better of rivals Atlético.

Real are 1.41 favourites to lift the trophy and 1.91 to win the match in 90 minutes. Atlético come into the game as Spanish champions, but Diego Simeone’s injury-hit side are 2.58 to win the competition for the first time or 4.00 to do so without the need for extra time or penalties (all odds are subject to change).

Last week’s draw with Barcelona gave Atléti their first league title in 18 years, but at a cost. Diego Costa and Arda Turan both picked up injuries and could miss Saturday’s final in Lisbon, while Carlo Ancelotti’s Real will welcome back record signing Gareth Bale after the Welshman’s recovery from injury.

“Winning La Liga was a remarkable achievement for Atlético Madrid, but the Champions League Final could be one game too far,” said GR88.com blogger Antony Jordan.

“Real Madrid have waited more than a decade for La Decima – their 10th European Cup victory – and it looks like the wait will end this weekend.”

This year’s competition has seen plenty of late goals this season, most recently Cristiano Ronaldo’s free-kick for Real Madrid against Bayern Munich, and more of the same at the Estádio da Luz will be great news for punters.

If a goal is scored in the 88th minute or later, GR88.com will refund selected losing pre-match bets as part of its Late Goal Refund promotion. Full details can be found at www.gr88.com/promotions.

About GR88.com
GR88.com (Great dot com) is a full featured online and mobile casino with more than 450 games from Microgaming and Play’n GO, including some of the world’s largest progressive jackpots. The GR88 sportsbook takes bets on over 4000 live in-game betting events every month including international football matches, tennis, rugby, National Football League, NHL and International hockey and NBA/NCAA basketball and many more. The GR88.com poker room is on the InstaDeal Speed Poker Network. GR88 is licensed for international betting under Olympian Trading Limited BVI which supplies and operates the world’s top games from leading software providers. GR88.com does not accept players from the USA or France. Affiliates are managed by MojoAffiliates.com.