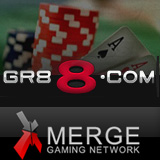 To keep on top of the action at the tables there’s now a dedicated window just for table stats where players can view information such as hands dealt, hands won and flops seen. Also, players can view percentages of pots won both pre and post flop.

For poker tournament players, a detailed tournament lobby page is now available for every tournament. The lobby screen contains vital information about the chosen tournament including a large clock to clearly show when the tournament starts. Also included in the new lobby screen are the player’s current bankroll and VIP points and a direct link to the cashier.

A minor but important change that’s been requested by players is the ability to set the local time zone rather than use the client server time. This feature also automatically changes the listed start times for the tournaments so they are correct for whatever time zone the player sets.

The first of four week-long rake races – part of the $100,000 ‘Race to Riches’ — started last week. Each week in June, $25K will be awarded to the players at the top of the leaderboard that week. Race points will be multiplied in ten designated tournaments each day.

GR88.com Poker is one of the coolest online poker rooms on the Merge Gaming poker network. It offers Texas Hold’em, Omaha, Stud and Draw and has thousands of players online to play them with. The Badbeat Jackpot is currently nearly $300,000. Using a single wallet, GR88.com players can also enjoy hundreds of casino games from Microgaming and CTXM or bet on thousands of sporting events including in-game betting.