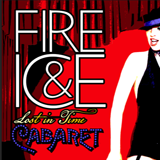 10 December 2012 (London, UK)- As famous for its elaborate entertainment as it is for being the hottest event in iGaming, Fire & Ice’s 2013 party will feature the largest and most elaborate stage show in the event’s 12-year history. Featuring stars from the television show “Britain’s Got Talent”, along-side a host of additional actors, dancers and performers, the organizers have designed a stage-spectacular that promises to outdo anything that’s been done in the past.

“The 12th annual Fire & Ice has been moved to East London, just minutes from the Excel Conference Centre, and the new venue gives us a huge stage, concert-quality lighting and sound, and space for over 2,000 attendees. The new space, which is nearly double the size of our past venue, has allowed my imagination to run wild, and on February 6th 2013, we will take you on a journey from Paris 1930 to Paris 2130 through a series of mind-blowing, time-travelling scenes performed at set intervals throughout the night,” according to entertainment co-organizer Michael Caselli.

Fire & Ice 2013 is being held on the evening of Wednesday, February 6th, 2013. Besides the event itself, there are individual dinner packages available, as well as corporate hospitality VIP packages. iGaming companies wishing to host a VIP table at the event for their staff or for their clients, please contact co-organizer Jodie Thind at Jodie@lyceummedia.com

About Fire & ICE (http://www.fireandiceparty.com)
Held each year between ICE Totally Gaming and the London Affiliate Conference (LAC), Fire & Ice is produced by iGaming PR and events specialists Lyceum Media. Now in its 12th year, Fire & Ice is the most anticipated event in the iGaming social calendar with 2,000 of the who’s who in attendance throughout the night. Fire & Ice is for the industry and completely supported by the industry.

Prev: Bulldog777 to Award the ‘Master of 777’ with an Epic Las Vegas Vacation with Cash and Show Tickets Next: Jackpot Capital Casino Players are Travelling the World to Win Over $85,000 in Prizes — $2500 Guaranteed Slots Tournament Christmas Day