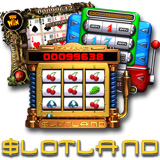 9 July 2010 (London, UK) – On the surface, Slotland.com is still the same easy-to-use all slots and video poker site that has been popular with online casino players around the world for more than ten years, but new Flash versions of many of the popular games with enhanced sound effects and graphics are giving players a whole new experience. Five of the fifteen games at Slotland.com are now available in enriched Flash format. New, improved versions of the remaining games will be launched in coming months.

“I’ve always liked the slots at Slotland, that’s one of the reasons I’ve been playing here practically since the internet was invented,” said one regular player. “The new games are the same basic games but the new graphics and sounds are a real treat for the senses!”

“The other reason I stick with Slotland,” continued the player, “Is that their customer service is so good. They’re always very prompt and polite when they answer questions and there’s never any fuss when you deposit or withdraw.”

The new game graphics look best when the new “full screen” option, which blows the game graphics to fill the whole screen, is selected. The re-designed games also feature improved navigation to other games and site features, and brief video tutorials to get new players started. The 5 games that have been re-launched so far are:

Jacks or Better – players hold and draw cards to collect the best possible poker hand, trying to get at least a pair of Jacks
Golden 8 – spinning diamonds earns bonus spins that multiply the last spin’s winnings
Reel Riot — a kitschy three wheel, single payline slot machine where up to two of the three reels can be held for the next spin and a Double Wild symbol can double or quadruple a winning line’s payout.
Treasure Box – a strategic, skill-based slot game that uses the same type of slot strategy as multi-hand video poker games such as Triple Play
Wild Heart – roaring lions and cursor eating snakes adorn this triple video poker game played with three 54-card decks (that include two jokers to increase chances of winning)

In a special summer contest, Slotland players are invited to submit photos (to support@slotland.com) of their favourite place to play at Slotland. Entries close 31 July when the best photo will win a $250 bonus, the next two $100 each and the remaining two $50 each! Entries will be posted on Flickr as they are received.

Slotland.com currently features 15 one-of-a-kind slot machines and video poker games. Four of the most popular games are also available on mobile phones and PDAs. All of Slotland’s slot machines give players the option of placing a maximum bet for a chance at the progressive jackpot. There’s nothing to download or install at Slotland since all games, including the new Flash version, are instant play casino games.