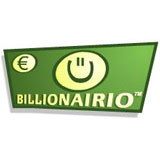 May 21, 2008 (Malta) — A UK woman is the latest winner at Billionairio.com, a raffle-style numbers game that could yet make her a billionaire. Sarah Jackson of Stafford was on board an EasyJet flight to Spain when she read the company’s “What would you do with a billion dollars?!” challenge in the in-flight magazine. Eager to demonstrate what she’d do if she became an instant billionaire, she bought a ticket and soon learned she’d won 1000€ in a preliminary draw. She is still eligible to win any of the lottery-style game’s subsequent prizes of 10 000€, 1 000 000€ & 10 000 000€ and she could even win the grand prize of €1 Billion.

“When I saw the ad I thought ‘Gee, I can think of a billion ways to spend a billion dollars!’” said the excited winner. “I’ll start practicing with this 1000€ just in case!”

Billionairio.com offers the biggest prize pool ever available anywhere and is the first game to offer a single player the opportunity to win €1 Billion Euro,” said Billionairo.com Managing Director Joseph Crivici. “And the chances of winning are better than any European state lottery.”

Billionairio.com determines its winning numbers through major global stock indices. Winning numbers are made up of the last digit of the closing value of pre-determined indices on the day of the prize draw. The prize pool increases with every ticket purchased. Each ticket has a unique number and there can be only one winning ticket for each prize. 75 million tickets have been made available and each ticket is eligible for as many as five separate cash prizes from 1000€ to the incredible 1 000 000 000€ final jackpot.

For further information about Billionairio.com or the latest winner in the richest game ever played, please contact:

About Billionairio.com
Billionairio.com is a raffle-style numbers game operated by Unimint Ltd. The company is licensed and regulated by Malta’s Lotteries and Gaming Authority (LGA) as appointed by the Maltese. Winning numbers are determined by the last whole digit of pre-selected global stock indices.