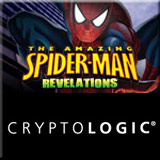 The new games are now available to players at Intercasino.com, and will be live on the sites of other CryptoLogic customers in the near future.

“At CryptoLogic, branded casino games are one of the pillars of our strategy, and today we extend our lead in this highly profitable segment even further,” said Brian Hadfield, CryptoLogic’s President and CEO. “CryptoLogic’s original Spider-Man slot game was one of our most successful games ever, and we have high hopes for these new games, which deliver a truly unique customer experience.”

Spider-Man Revelations
Players can battle the evil Doctor Octopus in this thrilling 25-line slot game featuring Marvel’s legendary super hero. One of the game’s bonus rounds challenges players to save a passenger during a transit tussle for the chance to win free spins or multipliers. Spidey senses will tingle at the three-level jackpot, multiple exciting bonus rounds and a chance to win 5,000 times a player’s original bet.

Dragon Sword
Players can follow a heroic knight into a dark, murky forest in search of his lost sword in this adventure-filled 25-line slot game, available exclusively from CryptoLogic. The game features a battle with a dragon in the bonus round and rewards from hidden treasures and random prizes. With a chance to win up to 6,000 their bet, this game will have players on the edge of their seats.

CryptoLogic’s new Casino Bonus Pack also features an enhanced version of Atlantic City Blackjack, one of the company’s most popular casino games. This version includes new and improved game features, such as auto-betting and auto-strategy functionality and enhanced graphics. The result is a new, dynamic presentation of this classic game that preserves the original game rules players know and love.

Boasting more than 200 games, CryptoLogic has one of the most comprehensive casino suites on the Internet today with games featuring some of the world’s most famous action and entertainment characters. CryptoLogic has earned rave reviews from industry peers and players alike, and in 2008 earned Gambling Online Magazine’s Top Casino Software award for the third consecutive year. Based on the votes of players around the world, it is widely considered the industry’s top honour.

About CryptoLogic (www.cryptologic.com)
Focused on integrity and innovation, CryptoLogic Limited is a leading blue-chip public developer and supplier of Internet gaming software. Its leadership in regulatory compliance makes it one of the very few companies with gaming software that is certified to strict standards similar to land-based gaming. WagerLogic Limited, a wholly-owned subsidiary of CryptoLogic, is responsible for the licensing of its gaming software and services to blue-chip customers that offer their games to non-U.S. based players around the world. For information on WagerLogic, please visit www.wagerlogic.com.