May 1, 2009 (London, UK) — Online Bingo site Crown Bingo, powered by Virtue Fusion Alderney bingo software, have had their biggest ever pay out of £240,561 to lucky member Glen Johnson from Bristol. The record pay out came after Glen hit the jackpot for a £2 stake on popular side game Lucky Ladies 88 after being a member for just 10 days. 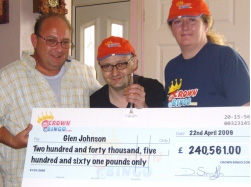 The win for Glen Johnson and his family comes at a good time as they face a potentially stressful and tough period ahead. Glen’s wife Julie Johnson returned from hospital on the same day as the big win to prepare her housebound husband Glen for devastating news that she could have throat Cancer. Forty-three year old Glen and his wife both suffer from disabilities. However, Julie is able to get around more, running shopping errands and taking the children to school. Glen, who has been housebound for the last four years due to spinal problems, is hoping the money will pay for the special mobility equipment he needs to make life easier for his wife.

Dan Smyth, CEO Crownbingo.com, said the company was overjoyed that the biggest pay-out in its three-year history had gone to a couple whose lives could be transformed by the cash. “We’re delighted to have yet another big winner and it’s even more pleasing to know what a difference the money will make to Glen and his family.

Bob McCulloch, CEO of Virtue Fusion Alderney, said, “It sounds like Glen and his wife have had a tough time of late so hopefully this will make things easier during these already difficult times. It’s great to know that the jackpots generated by our networked software could have significant benefits for the future of this family. I fully endorse what Dan said and sincerely hope that this win helps the family through its potentially difficult times.”

About Virtue Fusion (Alderney) Limited
Virtue Fusion Alderney develops Bingo and networked gaming solutions for the online gaming industry, primarily contracting with existing online gaming operators, bookmakers, land-based operators and media companies. Virtue Fusion Alderney continues to be the world’s leading developer and licensor of Internet bingo products, with a gaming network offering some of the largest bingo prizes to be found, due to its vast network of key operators and peak traffic of over 6,000 concurrent players. The Group specializes in providing Bingo, networked games, slots and scratch cards to some of the world’s best-known brands, including Mecca, Ladbrokes, William Hill, Sky, Bet365 and Gala. Virtue Fusion has recently launched its multicurrency product and is now actively marketing into Europe and worldwide. Virtue Fusion Alderney Limited is operated and regulated from Alderney.