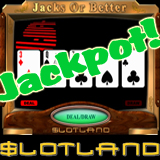 A player known as MSMIKEY was playing the popular “Jacks or Better” video slot when she struck it rich on her 134th spin that night. MSMIKEY has been a regular player at Slotland.com for almost two years. Although all slots and video poker games on Slotland’s mobile casino site are connected to the same progressive jackpot as their web games, MSMIKEY was playing on her home computer when she got lucky.

The object of the “Jacks or Better” is to obtain the best possible poker hand. On the initial deal, players are dealt five cards face up. They can hold all cards dealt or receive up to five new ones. Hands are ranked according to standard poker hand rankings, although in this game the player must have at least a pair of Jacks to win.

For years, Slotland’s progressive jackpot has been hit quite regularly. The site has announced a major winner every six weeks or so, always for over $100,000. It had taken longer than usual for the last win, but MSMIKEY’s win puts the notoriously regular jackpot back on schedule.

“Our jackpot has never reached millions of dollars like some do,” said Ondrej Tuma of Slotland. “But then, we only go weeks, not years, between jackpot wins. I think our players feel like they have a better chance of winning our jackpot. We’ve certainly never had a winner that was disappointed in a $100,000 – $200,000 win!”

For further information about this jackpot win or Slotland’s online and mobile casino games, please contact:

About Slotland.com
Established in 1998, Slotland.com is renowned for its fairness, security and sincerity. Slotland.com’s progressive jackpot is currently won on average every six weeks and usually stands at over $100,000, making it one of the most frequently won jackpots on the Internet. In 2005, the pioneering entertainment company introduced its first slot machine for the mobile phone/PDA platform. Slotland.com has been voted “Most Unique Slot Site” and “Best Progressive Jackpot Site” by Strictly Slots Magazine readers, named “Best Web TV” in a Gambling Online Magazine poll, and selected as a finalist in the ME Awards “Best Mobile Gambling Company” category. The philanthropic company funded the construction and operation of a school and community center in Malawi for two years (help-malawi-children-charity.org). Earlier this year, Slotland.com launched a free 3D casino, WinADay.com, a whole new kind of online casino experience with realistic three-dimensional lobbies and virtual casino employees to assist with the free instant-play Flash games, as well as FreeSlot.com which features free non-stop slots tournament with nearly $10,000 in weekly prize money.