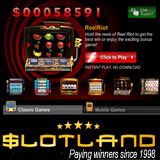 1 October 2010 (London, UK) – Although Slotland.com has been around since the very beginning of online casinos, other than adding new games it has changed very little. For its 12th birthday this week, the slots and video site has launched a new look that shows off its selection of one-of-a-kind games, many with newly enhanced graphics and sound effects, even better. Special Birthday Bonuses this week invite players to join in the celebrations.

“Even players that told us to never change anything are telling us that they like this little facelift,” said casino manager Michael Hilary. “It makes it much easier to browse through the games. But the basic organization is the same and our design team has kept the same comfortable look and feel that the site has had since the beginning. It’s still black with white type!”

This summer, Slotland introduced new enhanced versions of five of its most popular games with improved graphics and sound effects. With stunning game graphics that fill the whole screen the new games make familiar favourites more fun than ever. The re-designed games have brief video tutorials to get new players started. Five spectacular new games debuted in July: Jacks of Better, Golden 8, Reel Riot, Treasure Box and Wild Heart video poker. Since then, the new Lucky Ducts has been added.

Slotland.com currently features 16 one-of-a-kind slot machines and video poker games. Six of the most popular games are also available on mobile phones and PDAs. They’re all instant play casino games with nothing to download or install.

Slotland’s Affiliate Manager will be at the Budapest Affiliate Conference.
To arrange meetings there webmasters should contact jack@slotlandaffiliates.com

About Slotland.com
Established in 1998, Slotland.com is renowned for its fairness, security and sincerity. Slotland.com’s progressive jackpot is won on average every six weeks and usually stands at over $100,000, making it one of the most frequently won jackpots on the Internet. In 2005, the pioneering entertainment company introduced its first slot machine for the mobile phone/PDA platform. Slotland.com has been voted “Most Unique Slot Site” and “Best Progressive Jackpot Site” by Strictly Slots Magazine readers, named “Best Web TV” in a Gambling Online Magazine poll, and selected as a finalist in the ME Awards “Best Mobile Gambling Company” category. Last year, Slotland.com launched a 3D casino, WinADayCasino.com, a whole new kind of online casino experience with realistic three-dimensional lobbies and virtual casino employees to assist with the free instant-play Flash games, as well as FreeSlot.com where new players can play slot machines for free.