Fourth Six-Figure Winner This Year Could Be at Any Moment 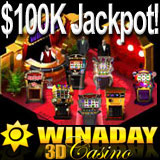 July 8, 2009 (London, UK) – The progressive jackpot at 3D online casino WinADay.com is about to top $100,000. If it’s anything like the jackpot on its parent site, Slotland.com, that could mean it’s about due for a big win! However, with its animated casino staff and one-of-a-kind games, there really is no other online casino quite like WinADay.com, so it’s anyone’s guess just how high it will go.

This is the fourth time this year that the WinADay.com progressive jackpot has gone over $100,000. Last time, it was won shortly after it hit the magic six figure mark, but the other two times it kept climbing to $148K and $159K before it was won.

All of the slot machines and video poker games at WinADay.com 3D casino are tied to one large jackpot pool. The next big win could be on any of the games, but since two of the first three big jackpots were won playing the Wheeler Dealer, that slot machine is getting a reputation for being lucky.

“Some players think that the Wheeler Dealer must be lucky, since it’s already had two big jackpots. Others think it’s more likely the next win will be on any other game next time,” said Ondrej Tuma of WinADay.com. “Technically, of course, as long as you’re making the required bet, you could win the progressive jackpot playing any of our games.”

This video clip about the last progressive jackpot win features some of WinADay.com’s favourite games: http://www.youtube.com/watch?v=FJZzawGO6kQ

The WinADay.com 3D Games Lobby features seven no-download, instant-play Flash games that won’t be found at any other online casino. There is nothing to download or install so players can start having fun as soon as they arrive.