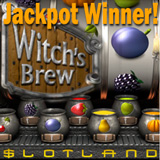 16 June 2011 (London, UK) – A middle-aged father who won a $128,734 jackpot at Slotland.com last week says he’ll use his winnings to pay for his daughter’s college education. The player, who’s been playing online slot machines at Slotland for about year, won the massive pay out playing the new Witch’s Brew online slot machine.

“My daughter is just starting college and my wife and I were worried about how we’d be able to pay for it all,” said the jackpot winner, known as RMP1956 at the popular online casino. “Education is important but it’s so expensive these days! Well, I guess that’s one thing we won’t have to worry about any more!”

Witch’s Brew is an uncomplicated single pay line slot machine where players watch the Witch’s magic boil right in front of them. Players can bet as little as $0.50 or as much as $4.00 to see what she has in store. During the game, pots of jam fill up and boil over. Hidden witches activate Wild symbols according to the flavour of the overflowing jam. Boiling jam pots can activate more than one Wild symbol, increasing chances of spinning a winning combination even more. Three Wild Pumpkins like RMP1956 got wins the progressive jackpot.

“Slotland is one of the few online casinos that I trust. I really enjoy the games — they’re fun and easy to understand. This Witch’s Brew, it’s really something. I had actually never tried it until the night I hit the jackpot on it!” said the winner. “I love watching the cauldrons boiling over, especially when I get them all going and I can play with all seven wild symbols active. I also love the little animated black cat that meows every once in awhile. Not to mention a six-figure pay out is pretty darn good too!”

“It’s funny,” said Slotland.com manager Michael Hilary. “Most players have a favourite game that they play more than others. But it seems that a lot of jackpot winners lately have hit big when they were taking a break from their usual game and trying out something different. Fortunately we’re constantly adding new games so there’s always something different for them to try!”

Hit on average every 6-8 weeks, this time it had been nine weeks since the Slotland jackpot had seen a big jackpot win. Although it sometimes soars to nearly $200K, the average jackpot win is like this one, about $130,000.

Slotland.com has been offering one-of-a-kind slot machines and video poker games for more than twelve years. Slotland is a no download casino. There are currently 21 instant-play casino games to choose from – none of them found at any other online casino. Six of Slotland’s games are also available at its mobile casino.

The progressive jackpot at Slotland was reset to $50,000 after this win. It’s already over $60,000 and climbing quickly. Meanwhile at Slotland’s sister casino, WinADayCasino.com, the jackpot is over $170,000 and statistically overdue for a big win.

About Slotland.com
Established in 1998, Slotland.com is renowned for its fairness, security and sincerity. Slotland.com’s progressive jackpot is won on average every six weeks and usually stands at over $100,000, making it one of the most frequently won jackpots on the Internet. In 2005, the pioneering entertainment company introduced its first slot machine for the mobile phone/PDA platform. Slotland.com has been voted “Most Unique Slot Site” and “Best Progressive Jackpot Site” by Strictly Slots Magazine readers, named “Best Web TV” in a Gambling Online Magazine poll, and selected as a finalist in the ME Awards “Best Mobile Gambling Company” category. In 2008, Slotland.com launched WinADayCasino.com, a whole new kind of online casino experience with beautifully illustrated whimsical, one-of-a-kind instant-play Flash games.

A father who won a $128,734 jackpot at Slotland.com last week says he’ll use his winnings for his daughter’s college education. He won the massive pay out on the new Witch’s Brew online slot machine.