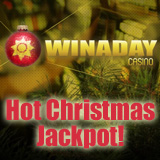 20 December 2010 (London, UK) – Winter winds may be howling across Europe and North America this month, but with its progressive jackpot approaching $150K and well overdue for a big win, things are really heating up at WinADayCasino.com. There are so many new games at WinADay now that the lobby has recently been redesigned to make room for them all. The next big win could happen on any of the unique online casino’s 21 one-of-a-kind games.

“Of course the jackpot can be won any time,” said WinADay Casino manager Michael Hilary. “It’s completely random. You just have to hit the right combination and have placed a max bet on that spin. But slot strategy isn’t always logical! When the jackpot gets big enough or goes long enough without a win, a lot of players start to feel like the very next spin could be a massive winner, so we see a lot more max bets at a time like this.”

There were six major jackpot winners at WinADayCasino.com in 2010. Marie S won $158,778 playing the Slot 21 Game just last month. In August, a Florida player won just under $100K playing the new Leprechaun Luck. A New Jersey film student won over $200,000 in June and a retired widower won a record-breaking $224,420 jackpot in March. The first jackpot win of 2010 was when a special education teacher won $115,803 on the Vegas Mania slot machine.

“On the one hand, I’d love to see the jackpot reach a quarter of a million dollars this time,” said Hilary. “That’d be a record. But on the other hand, we’d love to pay out a huge jackpot to someone right at Christmas! Our Reel De Luxe slot machine – the one that’s dedicated to shoppers – is all decked out for the holidays. Wouldn’t it be cool if someone hit the jackpot on that game!?”

Beginning with the new Aces and Faces video poker game that launched in January and including the new Double Double Bonus Poker that just launched earlier this month, WinADayCasino.com has added 11 unique and original new games to its collection this year. Leprechaun Luck launched in time for St. Patrick’s Day and Roulette 5 – a combination of slots and roulette — followed in April. In May, Slot 21 with its Blackjack type bonus game was introduced and for summer, the exotic Tropical Treat slot machine arrived in June. Keno was added in July, La Roulette (a European Roulette game) arrived in August and Jackpot Jinni went online in September. Win A Fortune, based on the popular American TV game show, premiered in October and Egyptian-themed Pyramid Plunder made its debut in November. They’re all instant-play so there’s no downloading or installation required.

“When we first launched we had only three games displayed in a 3D lobby. Now that we have so many games we had to find an easier way for players to browse through them and to get quickly to their favourites. We’ve had nothing but positive response to the re-design.”

View WinADayCasino and Slotland news on the Slotland News channel at YouTube: http://www.YouTube.com/SlotlandNews

About WinADayCasino.com
A product of Slotland Entertainment S.A., WinADayCasino.com is a whimsical instant-play Flash casino offering unique free and real-money slot machines and card games that are available only at WinADay. All of the one-of-a-kind games are tied to one progressive jackpot. Generous deposit bonuses, game-of-the-month bonuses, daily random draws bonuses and frequent six-figure progressive jackpot wins have made this casino popular around the world.WinADay’s affiliate program is managed by SlotlandAffiliates.com.