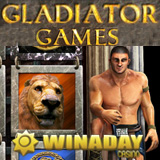 7 November 2012 (London, UK) – WinADay Casino has just introduced a mind-boggling new Roman-themed slots game, Gladiator Games. A $3400 slots tournament will be played on the new game this week. Gladiator Games features an incredible animated bonus game where players choose a gladiator to fight for their Trophy Chest. Like Fair Tycoon and Enchanted Gems the new Gladiator Games is one of WinADay’s Premium games.

Gladiator Games is a 5 reel video slot with 30 pay lines and bets from $.05 to $2 per line. A hunky Roman soldier stands guard over the classically styled slots reels. During the regular game, players win armor for him and collect gold coins in their Trophy Chest. In the incredible bonus game that’s triggered once the armor is complete, the screen becomes an animated Roman arena and Gladiators fight to win the coins in the Trophy Chest.

“You don’t just sit back and watch an animation once the battle begins,” explains Michael Hilary, manager of the popular instant play casino. “In the bonus game, first you have to choose a gladiator. During the fight players select maneuvers and determine attack order. It’s fun!”

The scatter is a Gold Coin that fills up the Trophy Chest. An animated Lion symbol is Wild and when it appears all other Lions become Wild. Maximum line payout is 1000x for 5x Caesar.

The Gladiator Games Slots Tournament starts tomorrow, November 7th. Players have until Sunday November 11th to achieve the highest score on the game. $3,425 in prize money will be awarded. Next week, the Top Bettor contest will award another $2000 in prize money

With Fluffy Paws and its animated pets introduced last month and now the new Gladiator Games, WinADay has 34 one of a kind casino games that can’t be found at any other online casino. WinADay’s games are built with Flash technology so they work great on computers, phones and tablets.

About WinADayCasino (http://www.winadaycasino.com)
A product of Slotland Entertainment S.A., WinADayCasino.com is a whimsical instant-play Flash casino offering unique free and real-money slot machines and card games that are available only at WinADay. Most of the one-of-a-kind games are tied to one progressive jackpot. Generous deposit bonuses, game-of-the-month bonuses, daily random draws bonuses and frequent six-figure progressive jackpot wins have made this casino popular around the world. WinADay’s affiliate program is managed by SlotlandAffiliates.com. WinADay players interact with each other and receive special casino bonuses on Facebook: www.Facebook.com/WinADayCasino.