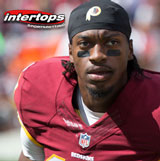 September 9, 2015, London, UK (Press Release) – The 2015 NFL season begins September 10th when the Steelers and Patriots go toe to toe in the Week 1 opener. Intertops Sportsbook has been taking thousands of bets on pre-season predictions for the season ahead, but one of the most popular wagers has been “RGIII: Team for the 2016 season”.

“Robert Griffin III wasn’t picked as the starting QB for the Redskins this season – the spot was given to Kevin Cousins – after Griffin suffered a concussion in Week 2 of the preseason,” noted an Intertops bookmaker. “When RGIII was drafted in 2012, he was one of the most anticipated Rookies in the NFL, but several injuries led to today’s situation and to some experts saying that he should make a move to get his career back on track.”

A recent NFL rule change says that the ball for the extra point field goal or “PAT” (Point after Touchdown) will be placed on the 15-yard line and no longer on the 2 yard line, making the extra point more difficult to be good. So “Regular Season PAT Success Rate – Over/Under 95.5%” has also been seeing a lot of action.

Bet on NFL and qualify for $500 free bet during playoffs.

Intertops Sportsbook, which took the world’s very first online sports bet, is starting what looks to be an exciting season of American football with a $500 Free Bet offer. Everyone wagering on the NFL during regular season has the chance to qualify for $500 extra in time for the playoffs.

Intertops also offers a 20% Kick Off Bonus worth up to $100 on a deposit through September 13, 2015. To claim this NFL bonus, players should quote bonus code NFL20 to a live chat agent when they make their deposit.

The full-featured online sportsbook is offering competitive odds on every possible aspect of the football fall ahead to keep fans happy from the word go. (https://sports.intertops.eu/en/Bets/Competition/1018).

Intertops Sportsbook has been trusted by sports fans all over the world for more than thirty years and offers in-play and pre-match odds on thousands of sporting events, across NFL and all US major league sports, tennis, soccer, golf and more. The online sportsbook has recently been completely redesigned with more wagers and attractive new parlay options and is now completely mobile-friendly.

About Intertops (www.intertops.eu)
Intertops was founded in 1983 in London with a UK Bookmakers License and relocated to Austria in 1992. They accepted the world’s first online bet in 1996. In 1997, the online business moved to Antigua while the traditional sports betting business remained in Austria. By 2003 Intertops began online poker operations and Intertops Casino now provides more than 300 state-of-the-art casino games from Real Time Gaming (RTG).