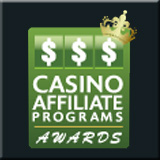 IRVINE, CA – January 8, 2008 – CasinoAffiliatePrograms.com (“CAP”), the world’s largest and longest-running affiliate marketing directory for the online gaming industry, has announced that the close of the voting process for its second annual CAP Awards (http://www.capawards.com) will be this upcoming Monday, January 12, 2009.

As part of next month’s celebrated CAP Euro London event (www.capeuro.com), next month’s CAP Awards ceremony is slated to be the company’s biggest ever. The annual celebration of the iGaming affiliate marketing industry, CAP Awards is generating higher-than-anticipated levels of interest and is slated to sell out, company officials have announced recently.

“We’re very excited about this year’s CAP Awards,” state Lou Fabiano, the company’s founder and president. “So far, we’ve seen an incredible amount of positive response to this ceremony, which is going to be even bigger and better than last year’s.

“So, we want to make sure people are aware that the end of voting officially arrives this Monday, January 12,” continued Mr. Fabiano. “If there are any CAP or PAP (PokerAffiliatePrograms.com) who haven’t yet voted, now is definitely the time! Don’t delay, this is your last chance!”

Hosted on Thursday 29th January at London’s The Brewery (www.thebrewery.co.uk), a venue that has recently been awarded Event Magazine’s Best Venue 2008, the black tie CAP Awards event honors exemplary and ongoing success within the online gaming industry. Unique among industry awards, CAP gives affiliate marketing community members the power to choose who is crowned as the winner in each of 23 categories.

The format for the evening is as follows:

To book tickets to CAP Awards 2009, go to http://www.event-space.com/capeuro2009/overview.asp.

CAP officials emphasized that all awards nominations are completely user-driven; employees and management of CAP or PAP had no involvement in the nominations.

Until the Monday, January 12 deadline, voters can visit http://capawards.com/nominations.php to cast their votes.

About CAP Euro
One of Internet gaming’s most celebrated events, CAP Euro is a semi-annual trade show extravaganza organized by CasinoAffiliatePrograms.com (CAP) to bring the iGaming affiliate marketing community together in one event. Held in London, Barcelona, and Amsterdam (with the possibility of expanding to other European locations), CAP Euro events are not only the industry’s premier opportunity to network and trade tips with the biggest names in the business, but also serve as the venue for the annual CAP Awards ceremony, held each January. For more information on CAP Euro, please visit www.capeuro.com. For more information on CAP Awards, go to www.capawards.com.

About CasinoAffiliatePrograms.com
CasinoAffiliatePrograms.com (or CAP, as it’s commonly known as) is the largest and longest-running online gaming affiliate resource, featuring an active community forum, chat rooms, affiliate marketing tools, industry news/articles, scam alerts, and a rigorous and distinguished certification process for online casino affiliate programs. The CAP Certification Process is held in the highest regard among industry experts, and is designed to protect the integrity of affiliates and the online gaming industry as a whole. For more information, please visit http://www.casinoaffiliateprograms.com.